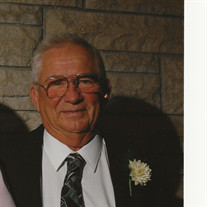 HAMLET – Hobart ”Hobie” Martin passed away at his home in Hamlet, IN on Sunday, September 5, 2021. He was born on August 19, 1923 to James and Laura (Bechdol) Martin, who resided in Cass County, Indiana during their lifetimes. Upon graduation from Young America High School in 1941, Hobie enrolled at Ball State University in Muncie, IN. However, after only one year of college, in February of 1943 he was drafted into the United Sates Army where he served in the US 86th Infantry Division in both the European and Pacific Theater Operations. The 342nd regiment went into action in March of 1944 in Belgium, crossed the Rhine into Cologne, and finished the war in Austria. Upon his discharge as a Staff Sergeant in 1946, he returned to Ball State and completed his Bachelor’s and Master’s degrees in business education. In 1947 he married Delores Addison, who preceded him in death on November 11, 2009. After teaching for five years in two small, rural high schools, Mr. Martin founded his own fertilizer business under the name of Farm Fertilizers, Inc. in Hamlet, IN. Eventually the company opened branch locations in Stillwell, Bourbon, and Westville for the sale of various fertilizer and chemical products. Additionally, he was a partner in a lawn and garden company known as DH&R in LaPorte, IN. The company in Hamlet was one of the first five companies in Indiana to manufacture and blend liquid fertilizer. In 1963 he was appointed a member of the first Board of Directors of the Indiana Plant Food & Chemical Association, where he served as president in 1973. Also, Hobie was on the Board of Directors for the National Fertilizer Solutions Association from 1974 through 1976. In his own community he served for six years on the first elected school board for the Oregon-Davis School Corporation. In 1991 Governor Evan Bayh awarded Mr. Martin the state’s highest civilian service award, Sagamore of the Wabash. As a lifetime member of both the American Legion (Post #356) in Hamlet and VFW (Post #10097) in Ft. Myers, Florida he served as a Post Commander in Hamlet in 1959. He was a member of the Knox Masonic Lodge (#639) and a life member of the Murat Temple for the Shriners in Indianapolis, IN. He and his wife once held memberships at the Plymouth County Club in Plymouth, IN as well as a membership at the Cypress Lake Country Club in Ft. Myers, FL. During his lifetime Hobie enjoyed playing golf and traveling with family and friends. He is survived by his three children Laura Walters of Fayetteville, NC, Brent (Eileen) Martin of Plymouth, IN, and Brian (Brenda) Martin of Statesville, NC. He has one grandson Kevin (Stephanie) Walters of Fishers, IN and two granddaughters Kirsten Martin of South Bend and Erika Martin (Scott) of Manhattan, KS. He is also survived by his great grandson Kenneth Martin and four great granddaughters Anabelle, Vera, and Scarlett Walters and Cecilia Wilburn. He was preceded in death by his parents, loving wife, one brother Richard Martin in February 2007 and one sister Betty McKaig in March 2019. Two memorable events in his life were flying from Tokyo to Hiroshima in December, 1945 with Secretary of War Patterson. The pilot was Hobie’s good friend John Shoemaker, who was one of General Douglas MacArthur’s Headquarters airmen in Tokyo. In August of 2010 Hobie was selected as one of two veterans from Starke County to be enshrined at the World War II Museum. While president of Farm Fertilizers, Inc. Hobie Martin, along with eleven other Hoosiers and 800 United States delegates were invited to participate in a United States-Chinese joint session on industry, trade, and economic development in Beijing, China during June 15th through the 25th in 1988. This meeting was the first of its kind between the United States and China. During his coaching career, which was before class basketball was instituted, Coach Martin’s 1950 Stillwell team defeated LaPorte High School in the sectional by a score of 52-51 after trailing by thirteen points with six and a half minutes left in the game. The game immortalized in the book “Season of Upsets”. Enrollment at Stillwell High School for grades 9-12 was fifty-six students. He was an avid White Sox baseball fan as far back as the 1950’s when the Go-Go Sox were well-known for their second baseman Nellie Fox, pitcher Billy Pierce, and Manager Paul Richards. A member of the Greatest Generation, Hobie Martin will be missed by all. Visiting hours will be from 5:00 to 7:00 CDT Monday, September 13, 2021 and 10:00 to 11:00 CDT Tuesday, September 14 at the Rannells Funeral Home, Hamlet Chapel. Funeral services will be at 11:00 AM CDT Tuesday, September 14 also at the funeral home. A private burial will be held at Fletcher Cemetery. In lieu of flowers, memorial gifts may be made to the Northern Indiana Community Foundation (NICF) Oregon-Davis Elementary Academic Enhancement Fund (SFFE).

The family of Hobart Martin created this Life Tributes page to make it easy to share your memories.

HAMLET – Hobart ”Hobie” Martin passed away at his home in Hamlet,...

Send flowers to the Martin family.