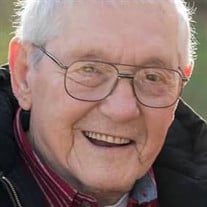 WALKERTON-Wyman A. "Hoppy" Hochstetler was born at home in Nappanee, IN on March 15, 1935 to his loving parents, Andrew and Sovilla Hochstetler. On November 10, 2018, he was released from his earthly constraints and touched the hand of his Savior. On May 12, 1960, as dad would say, he married a "Bremen gal", Maryln Stuntz. They spent the next 58 years together loving life. Survivors include his wife Maryln; son, Quinn (Talia) Hochstetler of Walkerton; daughter, Della Kay (Tim) Egger of Walkerton; four grandsons, Bobby (Danielle) Egger, Brandon (Aimee) Egger, Jared (Ashlee) Egger and Jack Hochstetler; six great-grandchildren, Emma, Zane, Olivia, Kendall, Durham and one on the way; seven sisters, Betty (Marvin) Slabaugh, Maude (Oscar) Burkholder, Alma (Chris) Slabaugh, Judy (Wilbur) Mast, Mary Hochstetler, Linda (Harley) Schmucker, Sherry (Marlin) Miller and sister-in-law, Laura Hochstetler; four brothers, Richard (Esther) Hochstetler, Lisle (Mary) Hochstetler, Andrew Hochstetler Jr. and Danny Hochstetler. He was preceded in death by two brothers, Devon and Jay Hochstetler and sister-in-law, Erma, Jay's wife. Together, Hoppy and Maryln brought joy to thousands of families while operating Stuntz & Hochstetler Pines for 42 years. In 1984, with his first loves permission, Hoppy pursued his second love, aviation. Already a licensed pilot, he started Hops Powered Parachutes Inc. to give others the joy of flight and taught over 3,000 students from all over the world. Hoppy retired in 2008 to spend more time with family, friends and his McDonalds buddies. He proudly served in Korea in the U.S. Army. He strongly believed that his duties and responsibilities were to his God, country and family. Hoppy was a member of the Walkerton United Methodist Church, the Walkerton American Legion Post #189, A.O.P.A., and the National Christmas Tree Growers Association. He was a graduate of the Indiana Police Academy and was the Mayor of the E&H Family Compound. Wyman "Hoppy" had a smile for all and a ready helping hand for whomever needed one. His life lifted all who met him. He will be missed greatly and forever in our hearts. A memorial service will be held Saturday, December 15, 2018 at 12:00 noon EST at the Walkerton United Methodist Church where friends may visit from 10:00 a.m. to 12:00 noon. In lieu of flowers, memorial contributions may be given to the Walkerton United Methodist Church. Rannells Funeral Home, Koontz Lake Chapel is handling arrangements.

WALKERTON-Wyman A. "Hoppy" Hochstetler was born at home in Nappanee, IN on March 15, 1935 to his loving parents, Andrew and Sovilla Hochstetler. On November 10, 2018, he was released from his earthly constraints and touched the hand of his... View Obituary & Service Information

The family of Wyman "Hoppy" Hochstetler created this Life Tributes page to make it easy to share your memories.

WALKERTON-Wyman A. &quot;Hoppy&quot; Hochstetler was born at home in Nappanee,...

Send flowers to the Hochstetler family.