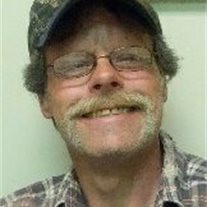 UNION MILLS-William Perry Clark Jr., 58, passed away Sunday, May 27, 2018 at LaPorte Hospital, LaPorte, IN. Mr. Clark was born February 16, 1960 at Rice Lake, WI to William Clark and Jean L. (VanSelus) Rhode. He was a former employee of Morris Percision and a member of the Rumors Breakfast Club of Hanna, IN. Survivors include niece, Cathy Baker and nephew, Josh Clark, both of Hanna, who were like his children; two sisters, Terri (George) Lawton of Koontz Lake and Janet (Richard) Goff of Koontz Lake; one brother, John (Shannon) Rhode of Teegarden, IN; sister-in-law, Cricket Clark of Hanna; grandchildren, Lilly, Landen and Layla Clark, Caleb, Michael, Bree and Cassie Baker; along with many nieces and nephews. He was preceded in death by his parents; one brother, Tim Clark; nephew, David Lawton; and step-father, John Rhode. A memorial service will be held Sunday, June 3, 2018 at 12:30 p.m. CDT at Rannells Funeral Home, Koontz Lake Chapel. Burial will follow at Grovertown Cemetery. Visitation will be Sunday at the funeral home from 10:00 a.m. to 12:30 p.m. CDT. To leave online condolences, visit rannellsfuneralhome.com.

The family of William P. Clark, Jr. created this Life Tributes page to make it easy to share your memories.

Send flowers to the Clark, family.