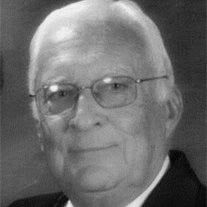 WALKERTON-Wesley DeWayne Pavey, 81, passed away peacefully at 3:55 a.m., Monday, June 10, 2013 at Millers Merry Manor, Walkerton. DeWayne was born February 29, 1932 in South Bend to the late Wesley Byron and Lucy Hostetler Pavey. DeWayne was a lifelong resident of Walkerton. On September 10, 1960 in Starke County, he was united in marriage to Mary Alice Sokola, who survives. Along with his wife, Mary Alice, he is survived by two daughters, Mashelle of Naperville, IL and Monique of Walkerton; a son, Wesley of South Bend; one grandson, Dyllon Pavey of Plymouth; Lisa and Ryan Jolly of Plymouth, who were very dear to his heart; one brother, Dallas Eugene (Marilyn) Pavey of LaPorte; along with several nieces and nephews. He was preceded in death by his parents. DeWayne retired after 37 years as a State Farm Insurance agent. Prior to that, he worked for Cities Service Oil Company. He proudly served his country with the United States Navy. He was a Past Master of the Walkerton Masonic Lodge #619 and received his 50 year pin on December 3, 2003. He was Past Patron of the Walkerton Chapter of Eastern Star and for several years, he was Service Officer for the Walkerton American Legion Post #189. He was a member of the North Liberty Men's Auxiliary VFW Post #1954, the Loyal Order of the Moose, Plymouth Lodge #741, the Elks Lodge of Plymouth #2548, the Walkerton Historical Society and the South Bend Scottish Rite Lodge. DeWayne graduated from Walkerton High School and attended South Bend College of Commerce and Indiana University. Dewayne enjoyed attending NASCAR races, seeing the Indianapolis Pacers and Colts play and attending the sporting events of Dyllon and Ryan. He enjoyed his retirement in Naples, FL at Lake San Marino, water and snow skiing and golfing. He and Mary Alice loved traveling and spending time with family. Funeral services will be Thursday, June 13, 2013 at 11:00 a.m. (Eastern Time) at the Walkerton United Methodist Church with Pastor Perry Richards officiating. Burial will follow at the Woodlawn Cemetery, Walkerton where a military graveside service will be conducted. Friends may call Wednesday from 3:00 p.m. to 8:00 p.m. at Rannells Funeral Home, Koontz Lake and Thursday at the church one hour prior to the service. A Masonic service will be held at 7:00 p.m. Wednesday at the funeral home. In lieu of flowers, memorial contributions may be made to the Walkerton Food Pantry or the Walkerton EMS.

The family of Wesley DeWayne Pavey created this Life Tributes page to make it easy to share your memories.

Send flowers to the Pavey family.