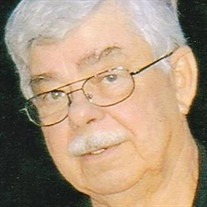 Watson C. White March 2, 1939-Mar. 8, 2019 CULVER-Watson C. White, 80, passed away Friday, March 8, 2019 in Hospice House, South Bend, IN after a courageous battle with cancer. Watson was born March 2, 1939 in East Chicago, IN to Watson and Josephine (Lauren) White and lived in the area most of his life. He was a self-employed construction worker and farmer. On February 17, 1960 in Knox, IN, he was married to the former Pearl Pranger, who preceded him in death in 2014. He was also preceded in death by his parents. Survivors include three children, Debbie (Paul) VanDeMark of Culver, Kathie (Allen) Slonaker of Plymouth and David (Sarah) White of Elkhart; five grandchildren, Amy Jones of Culver, Amber (Shawn) Anderson of Culver, Michael (Julie) VanDeMark of Culver, Jessica (Derik) Fishburn of Rochester and Ryan (Erica) Wilson of California; seven great-grandchildren, Tara, Tonya, Hunter, Kennedie, Trenton, Gage and Kade; one brother, Richard (Brenda) White of Culver; and one sister, Sandra (Eldon) Amor of Culver. Watson was a beloved husband, father, grandfather and great-grandfather. He loved music, polka dancing and being surrounded by family and friends. Funeral services will be Monday, March 11, 2019 at 2:00 pm. EDT at Rannells Funeral Home, Hamlet Chapel with Pastor James Adcock officiating. Burial will follow at the Burr Oak Cemetery. Visitation will be Monday at the funeral home from 12:00 noon to 2:00 pm EDT. In lieu of flowers, memorial contributions may be given to the Center for Hospice.

The family of Watson C. White created this Life Tributes page to make it easy to share your memories.

Send flowers to the White family.