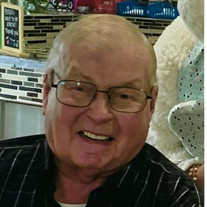 On April 11th, Warren went to his eternal home with his family by his side. He lived on his family owned farm of 100+ years and continued to farm until he was 84 years old. Family, faith and farming was his legacy. His other passion was antique tractors or anything with an engine. He especially loved being in competition with antique pulling tractors, and was always happy to show off his shiny tractor and pulling skills. He was always putzing around the shop and could fix any break-down using his unconventional ways. Throughout his life, he was always interested in new technologies, and had one of the 1st electric cars in town. He was surrounded by many life-long friends and was always seen with a smile on his face and his hand out for a neighborly shake. On October 13th, 1956, he married the love of his life and the center of his universe until his last breath, Sherry Schoch, who survives. Warren and Sherry raised their three children on the family farm. He is survived by his daughter Debra (Edward) Troike and Randy (Donelle) Burch, both of Hamlet. He has been lovingly greeted in heaven by his daughter Denise (John) Erlandson. John resides in Lebanon Indiana. Warren loved spending time with and teaching his grandchildren Jason (Kristen) Troike of Hamlet, Steven (Chris) Troike of Walkerton, Kyle (Megan) Burch of Hamlet, Ashlee Erlandson of Louisville Kentucky, and Aaron Erlandson of Carson City Colorado. Warren was preceded in death by his grandson Weston Burch. Warren was also blessed to spend time with his great grandchildren, Maddix and Weston Burch, Jackson and Zoe Troike, and Joshua Troike-Strange. Warren grew up the only boy on the farm amongst his four sisters. He is survived by Carol (Dick) Heinrich and Connie (Dan) Wegner. He was preceded in death by Delores (Don) Gjemre and Marilyn Burch. He was a beloved uncle to many nieces and nephews. Warren was a devoted and elder member of St. Matthew Lutheran Church in Hamlet. Warren was an advocate of giving back to his community and volunteered at the Hope Center in Grovertown, and Fletchers Cemetery in Hamlet. Warren also served as a board member for the Starke County CO-OP and was a Select Seed Corn dealer for many years. Funeral Services will be at 1:00 CDT Monday, April 18, 2022 at St. Matthew Lutheran Church, 2 W. Indiana Ave., Hamlet, IN. Visiting hours will be from 11:00 to 1:00 CDT on Monday, April 18, also at the church. In lieu of flowers the family requests memorial contributions be made to either St. Matthew Lutheran Church or St. Jude Children's Research Hospital.

On April 11th, Warren went to his eternal home with his family by his side. He lived on his family owned farm of 100+ years and continued to farm until he was 84 years old. Family, faith and farming was his legacy. His other passion was... View Obituary & Service Information

The family of Warren D Burch created this Life Tributes page to make it easy to share your memories.

On April 11th, Warren went to his eternal home with his family...

Send flowers to the Burch family.