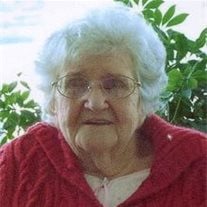 GROVERTOWN-Rev. Virginia Spillman, 92, of Bluffton, OH, formerly Grovertown, IN, passed away September 6, 2012 in Bluffton. Rev. Spillman was born May 27, 1920 in South Bend, IN to George and Maude (Mendenhall) Murray. On July 23, 1938, she was married to Clarence Pletcher, who preceded her in death in 1963. On October 1, 1965, she was married to Rev. Samuel Joiner, who preceded her in death in 1973. On June 7, 1975 she was married to Robert Spillman, who preceded her in death in 2010. She was also preceded in death by her parents, son, Daniel Pletcher, one granddaughter, two step-sons, sons-in-law, Roger Formhals, two brothers and three sisters. Survivors include: one son, David (Sylvia) Pletcher of Bluffton, OH; one daughter, Sharon Formhals of Austintown, OH; five grandsons; nine great-grandchildren; three great-great grandchildren; five step-grandchildren and nine step-great-grandchildren. Rev. Spillman was a graduate from minister and missionary training, earning a Master's Degree in Theology. She was a founding member of the Highway Chapel Church of God, Hamlet, IN, she served as pastor of the Church of God in Argos, IN, she took many missionary trips to Cuba in the 1950s and was a substitute teacher at Oregon-Davis Schools in Hamlet for many years. Funeral services will be Thursday, September 13, 2012 at 2:00 P.M. (Central Time) at Highway Chapel Church of God Hamlet with Pastor Dan Allen officiating. Burial will be at the New Oak Hill Cemetery, Plymouth. Friends may call at the church Thursday from 12:00 Noon until the time of services. Memorial contributions may be given to the Mennonite Memorial Home, Bluffton, OH. Rannells Funeral Home, Hamlet Chapel is handling arrangements.

The family of Rev. Virginia Spillman created this Life Tributes page to make it easy to share your memories.

Send flowers to the Spillman family.