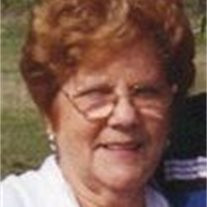 Walkerton - Viola Mae "Mammie" Jackson, 78, passed away Thursday, July 3, 2014, in her home. Viola was born February 16, 1936, in Rensselaer, IN to Alan and Maude (Helton) Hale. On December 24, 1953, in Plymouth, IN she was married to Howard Jackson, who survives. She is also survived by one son, Steve (Tammy) Jackson of Walkerton; one sister, Mary Sester of Walkerton; grandchildren, Jennifer (Jason) Berger of Plymouth, Ryan Jackson, Brad Woods, and Tyler Woods all of Walkerton; great-grandchildren, Jacob Berger of Plymouth and Mannix Jackson of Walkerton. She was preceded in death by her parents; brothers, Johnny, Addis, Mannis, Paul, Woodrow, Will and Clell Hale; and sisters, Lila Klingerman and Ruby Kinsey. Viola was a homemaker and a lifelong Christian. She was a loving wife, mother, and grandmother that always put her family before herself. Viola's family deeply appreciates the loving care provided by the Center for Hospice. Funeral services will be Monday, July 7, 2014 at 1:00 p.m. (Eastern Time) at Rannells Funeral Home, Koontz Lake Chapel with Pastor Perry Richards officiating. Burial will follow at the Tyner Cemetery. Friends may call Monday from 11:00 a.m. to 1:00 p.m. EDT at the funeral home. Memorial contributions may be made to a college fund for her great-grandchildren.

The family of Viola Mae Jackson created this Life Tributes page to make it easy to share your memories.