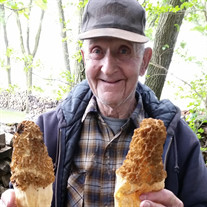 KNOX-Victor “Vic” Garland, 92, passed away Saturday, October 26, 2019 at his home. Mr. Garland was born December 16, 1926 in Starke County, IN to William K. and Gladys (Humes) Garland and lived in the area all of his life. On September 29, 1945 at Ober, IN, he was married to the former Blanche Beecham, who preceded him in death in 2004. He was also preceded in death by his parents; two sons, William “Butch” Garland and David Garland; one granddaughter, Missy Risner; four sisters; and two brothers. Survivors include three daughters, Donna (Richard) Beauchamp of Grovertown, Peggy (Arnie) Risner of Plymouth and Sandy (Bruce) Bennett of Knox; two sons, Dennis (Tina) Garland of Syracuse and Steve Garland of Knox; 16 grandchildren; 34 great-grandchildren; and five great-great-grandchildren; and one sister, Virginia Bernero of Culver. Mr. Garland was a retired employee of the Starke County Highway Department. He was a veteran of the Merchant Marines during WWII. He served as a 4-H Club leader for 35 years. He loved fishing, hunting, mushroom hunting, raising livestock, culminating in winning the Grand Champion Overall Barrow at the International Livestock Expo in Chicago. Funeral services will be Wednesday, October 30, 2019 at 2:00 p.m. CDT at Rannells Funeral Home, Hamlet Chapel with Pastor Bruce Bennett officiating. Burial will follow with Military Graveside Honors at Fletcher Cemetery, Hamlet. Visitation will be Wednesday at the funeral home from 11:00 a.m. to 2:00 p.m. In lieu of flowers, memorial contributions may be given to the family to be used for the Starke County 4-H Program.

The family of Victor "Vic" Garland created this Life Tributes page to make it easy to share your memories.

Send flowers to the Garland family.