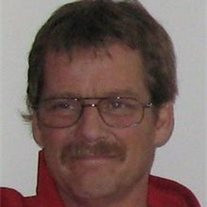 Terry Jay Rosander, 51 years old, of South Bend IN, formerly of Grovertown IN, born October 7, 1960 to Kathleen and Delbert Rosander, died peacefully in his sleep surrounded by his sisters and brother after a long struggle with the residual effects of a traumatic brain injury sustained in 1991. Terry graduated from Oregon Davis High School, Hamlet, Indiana in 1979 and was voted "best looking" his senior year by his peers. He was a talented basketball player and had many, many friends. Before his head injury, he was a successful and talented home builder, a career he took great pride in. Despite all odds, Terry used his fighting spirit to remain self-sufficient for many years. This due, in great part to the devotion of his mother, Kathleen, who unfailingly made daily trips to rehab for several months and pushed Terry to regain the abilities to function in his highest capacity despite his severe brain injury. Terry had a great sense of humor and was very weary of how he was perceived. Although he could not do the work himself, he knew when a carpentry job was done wrong and would tell you so and he was always right. He still could tell you how to measure anything! Terry is survived by his mother, Kathleen Blackman, stepfather, Klyde Blackman, sisters Sherry (Jeff) Hickman, Kerri (Rob) Stouder, brother, Tim Rosander, nieces he loved with all his heart, Amber Bynum, Erica Hickman, Kylie Stouder, and Alana Stouder. He was preceded in death by his father, Delbert Rosander, uncles Carl, Dale, Ronald "Worm" Rosander; Ford Dickson, aunt, infant Janet Rosander. A special thanks to Sherry Hickman (his sister and guardian) and Carl Rosander, for many, many years of selfless, loving devotion to Terry. Funeral services will be Thursday at 11:00 A.M. Central time at Rannells Funeral Home Koontz Lake Chapel. Burial will follow at Immanuel Lutheran Cemetery, Donaldson. Friends may call Wednesday from 6:00 to 8:00 p.m. CT and Thursday one hour prior to the service at the funeral home. Please come and join us to rejoice in Terry's arrival in heaven.

Terry Jay Rosander, 51 years old, of South Bend IN, formerly of Grovertown IN, born October 7, 1960 to Kathleen and Delbert Rosander, died peacefully in his sleep surrounded by his sisters and brother after a long struggle with the residual... View Obituary & Service Information

The family of Mr. Terry Jay Rosander created this Life Tributes page to make it easy to share your memories.