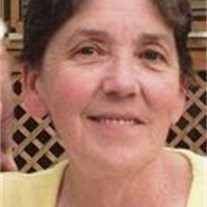 KNOX-Sharon L. West, 64, passed away Wednesday, January 28, 2015 at IU Health Starke Hospital, Knox, IN. Sharon was born August 15, 1950 in North Judson, IN to Hoy and Edna (Hess) Thompson and lived in the area all of her life. On April 28, 1973, in Knox, IN, she was married to Sonny West, who preceded her in death. She was also preceded in death by her parents and one brother, Scott Thompson Sr. Survivors include three children, Wally (Brenda) Palmer of Knox, Patty (Elias) Oritz of Plymouth, and Brenda (Eldon) Lauderback of Knox; six grandchildren, Shelly, Jonnie, Elias, Joe, Chaney, and Zack; one great-grandson, Gage; four brothers, David Thompson of Knox, Perry Thompson of North Judson, Ronnie Thompson of Dyer, and Lonnie Thompson of Ober; and one sister, Nancy Goble of Hamlet. Sharon was a homemaker. She was a member of the Bible Baptist Church, pledge to PSI IOTA XI, she loved doing crafts, and was the master of garage sales. A celebration of life service will be held Tuesday, February 3, 2015 at 12:00 noon (Central Time) in Rannells Funeral Home, Hamlet Chapel. Friends may gather with the family one hour prior to the service. In lieu of flowers, memorial contributions may be given to the family to help with funeral expenses.

The family of Sharon L. West created this Life Tributes page to make it easy to share your memories.

Send flowers to the West family.