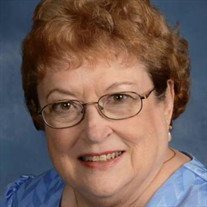 Sharon E. Klinedinst, 81, of South Bend, Indiana, passed from this earthly realm comfortably and with grace on March 24, 2021, in her beloved villa at Southfield Village. Sharon was born on December 8, 1939, in Denver, IN to the late Everett and Irene Ream. She was a 1957 graduate of Walkerton High School, a 1961 graduate of Indiana State University, where she obtained her Bachelor of Science degree in music and performed in numerous operas and musicals. In 1975 she earned her Master of Science degree in education from Indiana University. On June 17, 1961, Sharon was united in marriage at the Walkerton United Methodist Church to Kenny Klinedinst, who preceded her in death in 2019. During their 58-year marriage, she taught music for one year at LaPaz School prior to joining John Glenn School Corporation in 1968, where she taught elementary school music. Years later, she became the FIRST Director of Technology for JGSC until her retirement in 1998. In 1985, she was named Corporation Teacher of the Year. In addition to teaching music in the schools, Sharon taught private piano instruction in her home for 50+ years. For decades, she directed the Walkerton Community choir and served as music director at the Walkerton United Methodist Church. Her school children’s choirs performed on various stages and experienced extraordinary opportunities under her tutelage. It would be a hard pressed endeavor to find a child from Walkerton from that era who was not influenced by “Mrs. Klinedinst’s” dedication to children in the arts. Sharon’s goals were “to continually discover, learn and grow to become the person God intended for me to be and to share with others any knowledge, skills and attitudes I have gained through performing, teaching and leading”. Indeed, she did. She was a lifetime member of Sigma Alpha Iota, national music fraternity for women; a member of Kappa Delta Pi, National Education Association, Indiana State Teachers’ Association, as well as a member of the Music Educators’ National Conference, and the Walkerton chapters of the Business and Professional Women’s Club, and the Order of the Eastern Star. Having spent many years dedicated to her career, Sharon thoroughly savored retirement by traveling, visiting her son’s family in Tennessee, frequently engaging in tastings at her favorite cheese shoppes, and participating in Bingo and ice cream socials at “the big house” at Southfield Village. From the age of 75, her absolute jubilance and delight was achieved while singing with The Ripple Effect Vocal Visionary Project, Inc, with whom she radiated as a soloist both locally and on annual tours. Referred to as “choir mom”, she exemplified the love and acceptance mission of the organization through leading by example. A pivotal and shining achievement with the group culminated in December of 2019 when Sharon relished the moment of a lifetime to perform in Stern Auditorium at the world renowned Carnegie Hall. Sharon is survived by her two children, Sherry Klinedinst of South Bend, IN and Mike (Martha) Klinedinst of Crossville, TN; three granddaughters, Chloe, Katie and Carly; a sister, Jeanie Poston; a brother, Dennis (Robin) Ream, and several nieces and nephews. Visitation will take place at Walkerton United Methodist Church,1000 Georgia St. on March 31, 4-7pm EST. Due to current public health and safety standards for COVID-19, social distancing will be enforced and masks required. A brief graveside service will be held April 1 at noon EST at Woodlawn Cemetery, US-6, Walkerton. A celebration of life filled with music, memories, and all things “cheese” will take place at a later date. In lieu of flowers, memorial contributions in Sharon’s honor may be directed to The Ripple Effect Vocal Visionary Project, Inc. at https://www.rippleeffectchoir.org/make-a-donation, or Center for Hospice Care at https://foundationforhospice.org/donate/. To leave on-line condolences please refer to her obituary at rannellsfuneralhome.com.

Sharon E. Klinedinst, 81, of South Bend, Indiana, passed from this earthly realm comfortably and with grace on March 24, 2021, in her beloved villa at Southfield Village. Sharon was born on December 8, 1939, in Denver, IN to the late Everett... View Obituary & Service Information

The family of Sharon E. Klinedinst created this Life Tributes page to make it easy to share your memories.

Send flowers to the Klinedinst family.