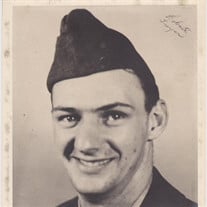 KNOX-Robert A. Troyer, 86, passed away Sunday, September 9, 2018, at IU Health LaPorte Hospital in LaPorte, Indiana. Robert was born September 28, 1931, in Starke County, to Arthur W. and Ida Bell (McDonald) Troyer and lived in the area all his life. He was a retired high line technician with Union Local #1392, attended the Ora Gospel Chapel Church, and was a veteran of the U.S. Army, serving in the Korean War. He also was a member of the Hamlet American Legion, and was a life member of the Disabled American Veterans. On July 29, 1970, in Hamlet, Indiana, he was married to Shirley (Bradley) Rodgers, who survives. Also surviving are three daughters, Michelle Fox of Winamac, Michaela (Kurt) Stout of Star City, and Jennifer (Robert) Cooper of Fountaintown, Indiana; two step-daughters, Colleen Langston of Bowling Green, KY and Geniene (Wilbur) Collins of Plymouth; two step-sons, Donald (Brenda) Rodgers, Jr. of Greenfield, IN and Herman Rodgers of Knox; two sisters, Esther Freet of Grovertown and Helen Personette of Cameron, Wisconsin; and many grandchildren and great-grandchildren. He was preceded in death by his parents, one step-daughter, Dana Rodgers, one brother, Irvin Troyer, one grandson, Donny Peverelle, and four sisters, Mabel Keiser, Lucielle Voorhies, Dovie Reed and Dorothy Howard. Funeral services will be Thursday, September 13, 2018 at 1:00 p.m. CDT at Rannells Funeral Home, Hamlet Chapel. Burial will follow at Crown Hill Cemetery in Knox. A military graveside service will be conducted by the Hamlet American Legion. Friends may call Thursday from 11:00 a.m. CDT at the funeral home until the time of the service.

KNOX-Robert A. Troyer, 86, passed away Sunday, September 9, 2018, at IU Health LaPorte Hospital in LaPorte, Indiana. Robert was born September 28, 1931, in Starke County, to Arthur W. and Ida Bell (McDonald) Troyer and lived in the area all... View Obituary & Service Information

The family of Robert A. Troyer created this Life Tributes page to make it easy to share your memories.

Send flowers to the Troyer family.