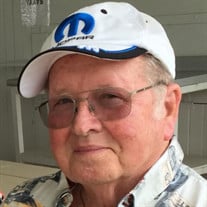 HAMLET-Robert Eugene Rowles Sr., 89, passed away Wednesday, July 17, 2019 in his home. Bob was born at home on January 26, 1930 in Rochester, IN to the late Estil C. Rowles and Mildred (Beck) Laramore and lived in Hamlet for 87 years. Bob is survived by his wife, Susan (Golding) Rowles. They were married almost 69 years. Other survivors include children, Robert E. Rowles Jr. of Valparaiso, IN, Debbie (Tom) Boudreau of Bloomington, IN, Greg Rowles of Three Oaks, MI and Susie Rowles of Mooresville, NC; eight grandchildren and their spouses; and 13 great-grandchildren. Bob loved automobiles and worked for his step-father at the Laramore Garage as a mechanic until 1964. He then moved into sales for Thompson Smith Company in Hamlet selling hydraulic cylinders to steel mills, later becoming part owner until it’s closure in 1989. Bob continued as a steel mill consultant until his retirement in 1995, after which he began enjoying winters in Sebring, FL. Bob loved playing softball, bowling and was an avid golfer with a zero handicap while being a member of the Dunes Golf Association and the Hamlet Golf Course. One of his greatest loves was local stock car racing in Plymouth where he was the mechanic and also loved NASCAR. Bob served on the Hamlet Town Board for 12 years and was very involved in the Starke County Republican Party. He loved his family and had a smile for everyone. Funeral services will be Saturday, July 20, 2019 at 1:00 p.m. CDT at Rannells Funeral Home, Hamlet Chapel. Burial will follow at the Fletcher Cemetery, Hamlet. Visitation will be Saturday at the funeral home from 11:00 a.m. to 1:00 p.m. CDT. A special thanks to Alice Abraham from Help at Home who has been part of our family the last 16 months. In lieu of flowers, memorial contributions may be made to VNA Hospice, 501 Marquette Dr., Valparaiso, IN 46383.

HAMLET-Robert Eugene Rowles Sr., 89, passed away Wednesday, July 17, 2019 in his home. Bob was born at home on January 26, 1930 in Rochester, IN to the late Estil C. Rowles and Mildred (Beck) Laramore and lived in Hamlet for 87 years. Bob is... View Obituary & Service Information

The family of Robert E. Rowles Sr. created this Life Tributes page to make it easy to share your memories.

Send flowers to the Rowles family.