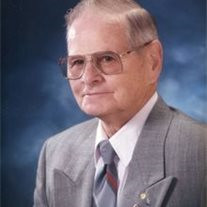 WALKERTON-Robert Clayton Pugsley Sr., 86, passed away Thursday, July 19, 2012 in his home. Mr. Pugsley was born February 11, 1926 in Lima, OH to Clayton and Grace (Bigelow) Pugsley and lived in the area most of his life. On June 17, 1950 in Walkerton, IN, he was married to Kathleen DePoy. Survivors include: his wife, Kathleen; one daughter, Kathy Pugsley of Indianapolis; two sons, Robert (Dawn) Pugsley and Bryan (Kathy) Pugsley, all of Walkerton; nine grandchildren; six great-grandchildren; two sisters, Donna O'Connor of North Liberty and Eleanor Wagner of Conroe, TX and one brother, Larry Pugsley of Minnesota. He was preceded in death by his parents and brother, Edgar Pugsley. Mr. Pugsley was the owner of Pugsley's Electric & Refrigeration. He was a U.S. Army Veteran of WWII, a member of the Walkerton American Legion Post #189, the North Liberty Masonic Lodge, the Scottish Rite South Bend Valley and was a lifetime member of the North Liberty VFW #154. Funeral services will be Monday, July 23, 2012 at 11:00 a.m. (Eastern Time) in Rannells Funeral Home, Koontz Lake Chapel with Pastor James Hatt officiating. Burial will be at the Woodlawn Cemetery, Walkerton where a military graveside service will be conducted. Friends may call Sunday from 2:00 to 6:00 p.m. ET and Monday after 10:00 a.m. until the time of services at the funeral home.

The family of Robert Clayton Pugsley, Sr. created this Life Tributes page to make it easy to share your memories.

Send flowers to the Pugsley, family.