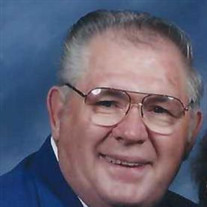 Knox – Robert R. Pucel, 89 of Knox, Indiana, passed away on February 27, 2020. He was born November 18, 1930 in Chicago, Illinois to the late Joseph and Jennie Pucel. On January 5, 1963 he married Maria Jevrosek whom survives. Also surviving are his children Roberta (David) Krause, Joseph (Jodi) Pucel, and Terry (Lori) Pucel; his grandchildren Jonnathon Pucel, Jordan Pucel, Lindey (Timothy) Johnson, Emily (Evan) Scherf, Lauren (Quentin) McGaughey, Robert J. Pucel, Rebecca Pucel, Bradley Krause, and Matthew Krause; great-grandchildren Owen Pucel, Theodore Johnson, and Grace Patrick; nieces Donna Pucel, Jody Pucel (Steve) Slavek and their children Maxine Slavek and Jake Slavek. He is also survived by many cousins who he loved spending time with. He is preceded in death by is parents and his brother Edward Pucel. Robert moved to Knox and started farming in 1955. He pursued his passion for farming for many years and enjoyed spending time with his family, especially his grandchildren and great-grandchildren. He had an unfailing commitment to his family and his Catholic faith and was a member of the St. Thomas Aquinas Catholic Church in Knox, Indiana. He was a veteran of the US Army serving in the Korean Conflict, a member of the Hamlet American Legion Post 356 serving eight years as Commander, a lifetime member of the Knights of Columbus, a member of the Farm Bureau Board, Starke County Alcohol Board, and the Starke County CO-OP Board. He also served on the Starke County Council for two terms and the Davis Township Advisory Board. A Mass of Christian Burial will be held at 11:30 AM CST on Wednesday, March 4 at St. Thomas Aquinas Catholic Church in Knox. Visitation will be held from 3:00 to 8:00 CST Tuesday, March 3 at the Rannells Funeral Home, Hamlet Chapel and again on Wednesday from 9:30 to 10:30 CST, also at the Funeral Home. A Rosary Service will be held at 8:00 CST Tuesday, March 3 also at the Funeral Home. In lieu of flowers the family would like Memorial Contributions be made to either the Starke County Food Bank or St. Vincent DePaul Society.

The family of Robert R. "Bob" Pucel created this Life Tributes page to make it easy to share your memories.

Send flowers to the Pucel family.