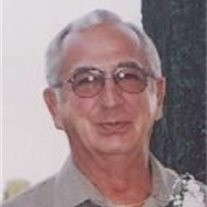 Hamlet - Robert C. Nowatzke Sr., 70, passed away Friday, December 6, 2013 in his home. Robert was born March 21, 1943 in Michigan City, IN to Earl and Mary (Lower) Nowatzke Sr. and lived in the area all of his life. On August 21, 1999 in Pinhook, IN, he was married to the former Venita Sweeney, who survives. Also surviving are his mother, Mary (Ralph) Nowatzke-Bobo of Grovertown; six children, Barb (Bob) Schoof of LaPorte, Bobbie (Mike) Nowatzke-Beaver of LaPorte, Robert (Barb) Nowatzke Jr. of Union Mills, Kaye (Joe) Neary of LaPorte, Chris (Joedy) Lantz of Koontz Lake and Stacy (Kirk) Rice of Walkerton; brother Donald (Marilyn) Nowatzke of Hamlet; 17 grandchildren and 12 great-grandchildren. He was preceded in death by his father, one daughter, Kathleen Nowatzke, one grandson, Marc Lantz and brother, Earl Nowatzke Jr. Robert was retired from Showman Supplies. He liked bartending at Smutzer's and P.R.C.U., playing pool, camping, antique cars, and dogs. Funeral services will be Wednesday, December 11, 2013 at 11:00 a.m. (Central Time) in Rannells Funeral Home, Hamlet Chapel. Burial will follow at the Fletcher Cemetery, Hamlet. Friends may call Tuesday from 4:00 p.m. to 8:00 p.m. and Wednesday one hour prior to the service. In lieu of flowers, memorial contributions may be given to VNA Hospice.

The family of Robert C. Nowatzke, Sr. created this Life Tributes page to make it easy to share your memories.

Send flowers to the Nowatzke, family.