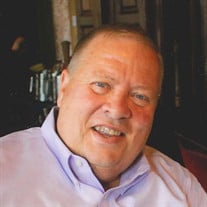 Richard M. “Dick” Reese of Walkerton, IN, passed away on May 31, 2022. Dick was born on August 9, 1955, in Plymouth, IN, to Robert (Bob) and Melba Reese. Dick graduated from John Glenn High School in 1973, and continued his education at Ball State University with a Bachelor’s in secondary education and a Master’s degree and Ed.S from Indiana University. Dick was preceded in death by his parents and a brother, James Reese. Dick is survived by his wife Cathy; a brother Gene (Marsha) Reese of Walkerton and a sister Patty (Tim) Grace of Plymouth; three children, Adam (Kristy) Reese of Lafayette, IN, Diane (Nick) Brusius of Mesa, AZ, and Eric (Carole Marchand) Reese of Paris, France; five grandchildren, Allison and Vincent Reese, and Natalie, Tyler, and Katelyn Brusius; and large extended family. Dick was a longtime resident of Walkerton and member of the United Methodist Church. He dedicated his life to giving to others. He had a passion for kids and education, starting his career as a teacher in Chesterton and then as an Assistant Principal in Knox. He then returned to serve his alma mater for 35 years as principal and superintendent with the John Glenn School Corporation. The ultimate Falcon fan, he was a constant presence and supporter of John Glenn athletics and education and spent his favorite hours at athletic and academic events all over Northern Indiana. Dick loved spending time with his family and friends. He was an avid sports lover beginning from his early years growing up in Tyner, IN. He played baseball, basketball, and ran cross country for John Glenn. He then carried on his love of sports supporting student athletes, encouraging his children, and cheering on the Chicago White Sox. Most recently he enjoyed watching his legacy continue with his grandkids’ many activities. Visitation will be held at Urey Middle School, 407 Washington St. Walkerton on Sunday, June 5th from 2:00 PM (EDT) to 7:00 PM (EDT). Funeral will be on Monday June 6th at 1:00 PM (EDT) at Urey Middle School. There will be no visitation on Monday prior to the funeral. In lieu of flowers, the family requests donations be made to the John Glenn Education Foundation or John Glenn Athletic Department at 101 John Glenn Dr., Walkerton, IN.

The family of Richard "Dick" Reese created this Life Tributes page to make it easy to share your memories.

Richard M. “Dick” Reese of Walkerton, IN, passed away on May...

Send flowers to the Reese family.