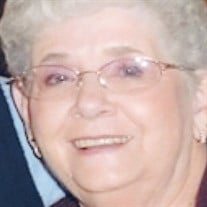 WALKERTON-Reatha Mary Vandall, 91, passed away Monday, July 15, 2019 at Miller’s Merry Manor, Walkerton, IN. Reatha was born September 24, 1927 in Springdale, West Virginia to Guy and Rebecca (Cox) Rookstool. She lived in the area since 1958, coming from West Virginia. She retired from Howmet in LaPorte in 1991. On October 10, 1946 in Hico, West Virginia she was married to Charles R. Vandall, who preceded her in death in 2006. She was also preceded in death by her parents; one son, Roy Dean Vandall; and seven brothers. Survivors include two daughters, Sonja (Ted) Bierly of Walkerton and Paulina Hurford of Nashville, IN; one son, John (Elaine) Vandall of Culver; 12 grandchildren; 21 great-grandchildren; and 14 great-great-grandchildren. Funeral services will be Friday, July 19, 2019 at 1:00 p.m. EDT at Rannells Funeral Home, Koontz Lake Chapel. Burial will follow at the Woodlawn Cemetery, Walkerton. Visitation will be Friday at the funeral home from 11:00 a.m. to 1:00 p.m. EDT. In lieu of flowers, memorial contributions may be given to Harbor Light Hospice, 1820 E Day Rd., Mishawaka, IN 46545.

The family of Reatha M. Vandall created this Life Tributes page to make it easy to share your memories.

Send flowers to the Vandall family.