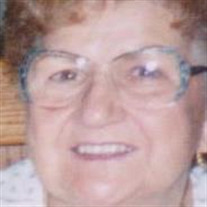 CULVER-Rakela “Raye” Lambertz, 101, formerly of Knox, passed away Thursday, September 20, 2018 at Miller’s Merry Manor, Culver, IN. Raye was born January 11, 1917 in Chicago, IL to Anthony and Josephine (DeCola) Porto and lived in the area since 1950. On September 19, 1936 in Chicago, she was married to Paul Lambertz, who preceded her in death in 1968. She was also preceded in death by one grandson; three brothers; one sister; and her special friend, Dan Toth. Survivors include two daughters, Eileen (Jim) Beaty of Belen, NM and Carol (C.J.) Heet-Crownover of Knox; one son, Paul (Vicki) Lambertz Jr. of St. Paul, MN; seven grandchildren; many great, great-great, and great-great-great-grandchildren; and two sisters, Eleanor Pecka of Downers Grove, IL and JoAnn Eggebrecht of Wheaton, IL. Raye was a member of St. Thomas Aquinas Catholic Church of Knox. She was the former owner of the Roadview Inn Restaurant and the Bra-Zen-Pit in Hamlet. Mass of Christian Burial will be held Monday, September 24, 2018 at 12:00 noon CDT at St. Thomas Aquinas Church, Knox. Burial will follow at the Holy Cross Cemetery. Visitation will be Monday at Rannells Funeral Home, Hamlet Chapel from 10:00 a.m. to 11:30 a.m.

The family of Rakela "Raye" Lambertz created this Life Tributes page to make it easy to share your memories.

Send flowers to the Lambertz family.