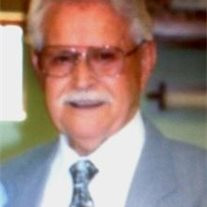 PLYMOUTH-Preacher Leonard Jackson, crossed over to his Heavenly Home at 3:15 a.m. Tuesday, February 11, 2014 in Miller's Merry Manor, Culver surrounded by his wife and family following an illness. Preacher Jackson was born August 10, 1922 in Newland, IN and was 91 years old at the time of his death. The son of the late Leander and Minnie (Marshall) Jackson, he was raised in Knox, IN and graduated from Center Township School. He proudly served in the U.S. Air Force during WWII. On July 9, 1944, he married his wife of 69 years, Leona Mae Pratt, who survives. Preacher Jackson was the founder of the Bible Baptist Churches in Knox in 1956; Kissimmee, FL in 1968; Plymouth in 1971; and Turlock, CA in 1981, followed by many years of preaching as an Evangelist. He is survived by his wife, Leona; five children, Clinos of Plymouth, Len (Gina) of Harriman, TN, Terry (Sharon) of Knox, Tim (Peggy) of DeMotte, and Ruth Ann (Tony) Soria of Plymouth; 16 grandchildren, 29 great-grandchildren; one great-great-grandchild; and two sisters, Ethel Taylor and Dora Risner. He was preceded in death by one granddaughter, two great-grandsons and nine siblings. Funeral services will be Saturday, February 15, 2014 at 11:00 a.m. (Eastern Time) at the Plymouth Baptist Church. Burial will follow at the New Oak Hill Cemetery, Plymouth where military graveside services will be conducted at the cemetery's chapel. Friends may call at the church on Friday from 5:00 p.m. to 7:00 p.m. ET and Saturday one hour prior to the service. In lieu of flowers, the family wishes memorial contributions to be made to the charity of the donor's choice. Rannells Funeral Home, Hamlet Chapel is handling arrangements.

The family of Preacher Leonard Jackson created this Life Tributes page to make it easy to share your memories.

PLYMOUTH-Preacher Leonard Jackson, crossed over to his Heavenly...