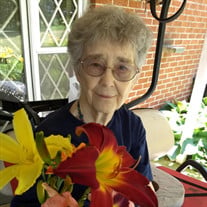 Phyllis Jeanette (Egbert) Hughes, 90, passed away surrounded by loved ones on August 26, 2020 at her home in Walkerton, Indiana, after a struggle with cancer. Phyllis was born in Boyero, Colorado, during the Dust Bowl and Great Depression. Her father worked on the Union Pacific Railroad, and ran a Texaco station with her mother outside of town. The family lived in Boyero and nearby Agate until her teens when they moved to Caplinger Mills, MO. She graduated from Stockton High School in 1948 receiving a provisional teaching certificate which allowed her to follow her dream of teaching. Her first job was at a one-room school in Flat Rock, MO to pay for college at Southwest Missouri State University in Springfield. She went on to teach at Potter, another one-room school near her parents in Chillicothe, MO. After graduation, she taught 4th grade in Independence, MO, where she met Milton Hughes. They were married in 1953 and remained so until his passing one day before their 66th anniversary. She and Milton started their family in the Kansas City area and then moved to Indiana, where Milton taught at Culver Academies until 1978. They returned to Independence after his early retirement due to failing eyesight. There Phyllis worked for the Mid-Continent Public Library in the Inter-Library Loan department until her retirement. They sold the old family home and moved back to Indiana again to be near their daughter Amy and her family. She worked very hard supporting her family and was a devoted member of her churches including the First Baptist in Independence, and the United Methodist in Walkerton. She was loved by her family and they will miss the sound of her laugh and enjoying movies, jigsaw puzzles, and watermelon. She was the dedicated spirit that drew her loved ones in, and took care of Milton’s needs through his blindness in his later years. Phyllis was preceded in death by her parents, Earl and Anna (Davis) Egbert, brothers Mervyn and Stanley, and husband Milton. Survivors include brother Steven (Pat) of Choctaw, OK; son Paul of El Cerrito, CA; daughter Amy (Paul Hernandez) Hughes of Walkerton, IN; granddaughter Chelsea of Milwaukee, WI; Silas of Walkerton, IN; and son Sam (Cecilia Rog-Hughes) Hughes of Kansas City, MO. A private memorial for Phyllis and Milton will take place at a date yet to be determined.

Phyllis Jeanette (Egbert) Hughes, 90, passed away surrounded by loved ones on August 26, 2020 at her home in Walkerton, Indiana, after a struggle with cancer. Phyllis was born in Boyero, Colorado, during the Dust Bowl and Great Depression. Her... View Obituary & Service Information

The family of Phyllis Jeanette (Egbert) Hughes created this Life Tributes page to make it easy to share your memories.