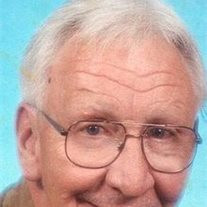 Walkerton - Pete E. Phenis, 69, passed away Thursday, January 30, 2014 in his home. Pete was born March 8, 1944 in Elwood, IN to Charles and Twila (Hobison) Phenis and lived in the area for 43 years. On September 18, 1971 in Walkerton, he was married to the former Velma Singleton, who survives. Survivors include his wife, Velma; three daughters, Dawn (Jim) McCool of North Liberty, Crystal (Sam) Singleton of Knox and Kim (Terry) Gainer of Walkerton; eight grandchildren, Allen, Kurtis, Cassie, Sammy, Desirea, Nick, Kelly and Hanna; two brothers, George and Chuck; and brothers and sisters by marriage, Ida (Huck) Roberson, Larry (Lena) Singleton and Glenna (Leigh Roy) Hahn. He was preceded in death by his parents; brothers, George and Jim Singleton and one sister, Romana Everly. Pete was a retired employee of AWP in Niles, MI. He was a U.S. Army veteran and an avid euchre player. Funeral services will be Tuesday, February 4, 2014 at 11:00 a.m. (Eastern Time) in the Rannells Funeral Home, Koontz Lake Chapel. Burial will follow at the Woodlawn Cemetery, Walkerton where military graveside services will be conducted. Friends may call Monday from 4:00 p.m. to 8:00 p.m. ET and Tuesday one hour prior to the service at the funeral home. In lieu of flowers, memorial contributions may be given to the family.

The family of Pete E. Phenis created this Life Tributes page to make it easy to share your memories.

Send flowers to the Phenis family.