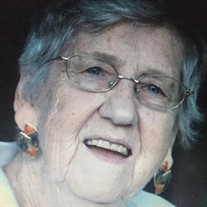 WAKARUSA-Patricia J. Bluhm, 87, passed away Sunday, April 28, 2019 at Miller’s Merry Manor, Wakarusa, IN. Born March 20, 1932, she was the daughter of the late TW Sebens and Alberta Sebens of Hamlet, IN. She is survived by her husband of 68 years, John E. Bluhm, also living at Miller’s Assisted Living in Wakarusa, and one sister, Wanda (Carl) Shivley. The couple have several children and foster children: Donna (James) Chatfield of Baltimore, MD, Theresa, deceased, (Greg) Miller of Evansville, IN, Duane (Ann) Bluhm of Hanover, VA, Mark Bluhm of Goshen, IN, Christina (Jerry) Callahan of Goshen, IN, Shonda Nolan of Bristol, IN, Shelly Bluhm of North Carolina, Sherri (Larry) Lundgren of Rolling Prairie, IN, Shirin (Mike) Reum of Elkhart, IN, , Michelle (David) Ivey of Elkhart, IN, Lori Neibert of Dover, OH, Dave (Monnie) Sheeley of Shipshewana, IN, Elizabeth Combs of Ligonier, IN and Donna Burdgett of Bristol, IN; 28 grandchildren; 39 great-grandchildren; and four great-great-grandchildren. Patricia and John were married May 7, 1950. Pat was a homemaker, day care provider and foster parent, with John for most of their married life. She began college at Ivy Tech in her 40’s, then continued to Purdue University to earn her Master’s Degree in Nursing. She worked at Elkhart General Hospital for many years then worked at Miller’s Merry Manor in Walkerton while they lived there. Pat was very outgoing, making friends easily, enjoying life and working hard . She was an avid pet lover, taking her dog or cat along on their travels. She enjoyed gardening and spent much of her younger years canning fruit and vegetable for the family. She and John spent much of their free time in the RV traveling to visit family, Bluegrass festivals and camping as well as taking several cruises. A private family Celebration of Life for Patricia will be held at a later date. Memorial contributions may be given to Miller’s Merry Manor, 300 N. Washington St., Wakarusa, IN 46573. Rannells Funeral Home, Koontz Lake Chapel is handling arrangements. To leave online condolences, visit [email protected]

WAKARUSA-Patricia J. Bluhm, 87, passed away Sunday, April 28, 2019 at Miller&#8217;s Merry Manor, Wakarusa, IN. Born March 20, 1932, she was the daughter of the late TW Sebens and Alberta Sebens of Hamlet, IN. She is survived by her husband... View Obituary & Service Information

The family of Patricia Jean Bluhm created this Life Tributes page to make it easy to share your memories.

Send flowers to the Bluhm family.