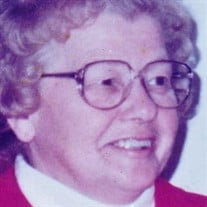 KNOX-Opal J. Cole, 85, passed away at her home on Sunday, March 17, 2019 following an illness. Opal was born April 4, 1933 in Walkerton, IN to George and Dalta (Bennett) Sinn and lived in the area all of her life. On September 25, 1954 in Knox, IN, she was married to Larry J. Cole, who survives. Also surviving are five children, Daniel Cole of Knox, Donna Singleton of Culver, Beverly (Randy) Chambers of Knox, Jeffery (Marla) Cole of Knox and Roger (Dawn) Cole of Gary; nine grandchildren; 14 great-grandchildren; six sisters, June Golding of Knox, Hazel Berg of Donaldson, Rachel Dowd of Culver, Mary Ann Wheeler of Knox, Evelyn Arnett of North Judson and Edna Bailey of North Judson; and three brothers, Glenn Sinn of West Moreland, TN, Ralph Sinn of Kokomo and Donald Sinn of Hamlet. She was preceded in death by her parents; two sisters, Helen Betz and Dorothy McIntire; two brothers, Raymond Sinn and Harold Sinn and son-in-law, Chester Singleton Jr. Opal was a former cook for Knox Elementary School and bus driver for Knox Community School Corporation. She owned and operated Granny’s Wagon, food wagon and always had it standing at the Starke County 4-H Fair where she loved seeing all of the kids that came to see her. She loved the outdoors, and especially her flower and vegetable gardens. She also loved making special gifts for her grandchildren and great-grandchildren. She will be dearly missed by all. Funeral services will be Friday, March 22, 2019 at 2:00 p.m. CDT at Rannells Funeral Home, Hamlet Chapel. Burial will follow at the Fletcher Cemetery, Hamlet. Visitation will be Thursday evening at the funeral home from 5:00 p.m. to 8:00 p.m. and Friday one hour prior to the service. In lieu of flowers, memorial contributions may be given to the family.

The family of Opal J. Cole created this Life Tributes page to make it easy to share your memories.

Send flowers to the Cole family.