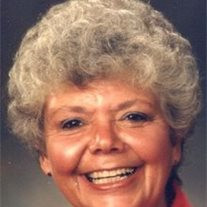 HANNA-Normalee Rosenbaum, 82, passed away peacefully on Saturday, December 18, 2010 at her home in Hanna, Indiana. Normalee was born January 29, 1928 in Chicago to Carl Gunnar and Irja (Lemberg) Carlson. When she was three years old, she and her parents moved to Sweden where she lived until her father passed away three years later. Normalee and her mother returned to Chicago, where her mother married Carl Johnson. The new family moved to Grovertown, IN where she grew up. On February 13, 1948, Normalee married LaVerne "Bud" Rosenbaum. They settled in Bud's hometown of Hanna for the sixty-two years of their marriage. There they raised two daughters, Marylee and Susanne. Normalee graduated from Grovertown High School and went on to receive a Bachelor's degree from Ball State University and a Master's degree from Valparaiso University. She taught school for over thirty years in LaCrosse School and South Central High School. She was an outstanding teacher of English who made a difference in the lives of hundreds of area students. She was a talented artist who applied that talent to everything she touched, the decoration of her home, the landscaping of her garden, the creation of scores of beautiful paintings and drawings and her unique personal greeting cards. She was also a master of the art of sewing, creating over the years everything from doll clothes to slipcovers, ball gowns to tailored suits. Normalee was a great cook who enjoyed entertaining friends and family. Her kitchen was small but she could make a fabulous meal for twenty or more. The Rosenbaum home was a center for family events. Her Scandinavian Christmas Eve dinner of lutfisk and all the trimmings was legendary. Normalee was a member of the First Lutheran Church of Hanna. She taught Bible School every summer and for many years was responsible for decorating the church for each season. Her drawings of the church continue to be used for church bulletins. She was preceded in death by her parents and her daughter, Marylee. Survivors include her husband, LaVerne "Bud"; one daughter, Susanne Knutsen of Hanna, grandchildren, AnnaLee (Mark) Jacobs of Union Mills and John Mockler of LaPorte; two great-grandchildren, Mazielee and Cole Jacobs of Union Mills; sister, Sonja (Keith Solberg) Johnson of Bloomington, IN and many nieces and nephews. Services will be Wednesday, December 22, 2010 at 11:00 a.m. (Central Time) at the First Lutheran Church of Hanna where friends may call one hour prior to the service. Burial will be in the Hanna Cemetery. In lieu of flowers, memorial contributions may be given to the church. Rannells Funeral Home, Koontz Lake Chapel is handling arrangements.

HANNA-Normalee Rosenbaum, 82, passed away peacefully on Saturday, December 18, 2010 at her home in Hanna, Indiana. Normalee was born January 29, 1928 in Chicago to Carl Gunnar and Irja (Lemberg) Carlson. When she was three years old, she and... View Obituary & Service Information

The family of Normalee Rosenbaum created this Life Tributes page to make it easy to share your memories.

Send flowers to the Rosenbaum family.