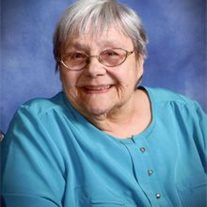 Walkerton - Norma Jane Wilson, 84, went home to the Lord on Sunday, April 27, 2014. She was greeted by her husband of nearly 60 years, Ralph E. Wilson, who had passed away February 4, 2007. Her beaming smile had greeted many at Miller's Merry Manor in Walkerton, where she resided. Norma was born February 15, 1930, in Cairnbrook, PA, to Archie and Anna (Small) Manges. She married Ralph Wilson on July 19, 1947. Together they raised six children, who blessed them with 15 grandchildren and 30 great-grandchildren. A homemaker most of her life, (no easy task with such a large family), she cared well for their needs with love. She became involved in her family's interests, their sports, 4-H, Girl Scouts and many social and school activities. She served in many roles within these organizations. She was a fine cook and made their home a gathering place for the whole clan. She enjoyed the many flowers in her yard and spent many hours also watching the birds and deer in her yard. Ralph and Norma camped and traveled the U.S. while they could, often with friends and family. She was especially involved in the Walkerton United Methodist Church, serving as a Sunday School teacher, on numerous committees, completing the Disciple study and supporting many missions of the church. Her faith was strong and vital. She instilled that faith in her children and witnessed that faith to many. She was preceded in death by her husband, her great-grandchild, Jacob Hartgraves, three brothers, Robert Manges, Harold Manges and Ivan (Buck) Manges, and her sister, Dorothy Manges Huston. Her surviving family will miss her greatly and remain in the area. Her six children include daughters, Barbara Wilson-Steiner of Walkerton, Linda (David) Crum of Rolling Prairie, and Deborah (Everett) Wallace of Donaldson, and sons, Donald (Sue) Wilson of Walkerton, Robert (Sherri) Wilson of Grovertown, and William (Melody) Wilson of Hamlet. The 15 grandchildren include, Carrie (Bruce) Miller, Sara (Dustin) White, Chad (Amy) Wallace, Jason (Jinny) Wallace, Julie (Chris) Robertson, Kyle (Keo) Wallace, Tara (Dave) Vermillion, Jessie (Dan) Chamberlin, Tina Bowman, Erica Santiago, Levi (Brandii) Wilson, Danae (Chris) Howard, Ashlie (Tom) Hartgraves, April (Brandon) Martin, and Michael Wilson. She is also survived by her sister, Jean Leonard Anderson of Ocean View, DE and sister-in-law, Maxine Manges of Rolling Prairie, IN. There will be visitation on Friday, May 2nd beginning at 10:00 a.m. EST before the celebration of her life at 11:00 a.m. at Rannells Funeral Home, Koontz Lake Chapel. Burial will follow at the Woodlawn Cemetery, Walkerton. Memorial contributions may be made to the Walkerton United Methodist Church, 1000 Georgia St., Walkerton, IN 46574.

Walkerton - Norma Jane Wilson, 84, went home to the Lord on Sunday, April 27, 2014. She was greeted by her husband of nearly 60 years, Ralph E. Wilson, who had passed away February 4, 2007. Her beaming smile had greeted many at Miller's Merry... View Obituary & Service Information

The family of Norma Jane Wilson created this Life Tributes page to make it easy to share your memories.

Send flowers to the Wilson family.