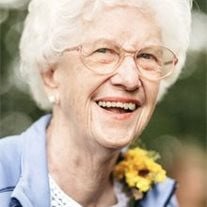 Neoma Personette was born December 1, 1924 in Jasper County, IN to Harry and Grace (Long) Hibbs. She passed peacefully on Thursday, May 17, 2018 at St. Joseph Regional Medical Center, Plymouth, IN with family by her side after a cerebral hemorrhage a few hours prior. Neoma grew up on a farm during the depression and the family moved to the town of Medaryville, IN, where she graduated from high school in 1943. During WWII, Neoma worked at the Kingsbury Ordnance Plant loading shells. After the war, Neoma attended beauty school in Valparaiso, IN and opened a shop in Medaryville. In 1948, Neoma wed Henry "Hank" Szady. Neoma and Hank relocated to Walkerton and later purchased a tavern, "The Old Style Inn", which later became "Hank's Bar". Neoma loved to reminisce memories of friends and various personalities and we would all howl with laughter with her stories. Neoma held so many smiles in her heart from those encounters. Hank passed away in 1974. Neoma later married James Personette in 1976. They enjoyed traveling and spending winters in Florida with their children and grandchildren and new friends. Jim preceded her in death in 2000. Neoma's passion was cooking for her family. Each day she would ask, "What shall we have for dinner", even on the day of her passing. Burket's produce was a "must go" each summer season. Neoma loved to walk, play Euchre, Hand & Foot and Bunko with her "club". She cherished their friendships. She was an avid reader, crossword solver and ice cream lover. Neoma was also an active member of the Walkerton United Methodist Church. She was also a member of GFWC Women's Community Club of Walkerton, the Walkerton Business & Professional Women's Club, and Better Homes Extension Club. Neoma's treasure was her family and her long-term friendships. Throughout her lifetime she kept in contact with her hometown friends and fondly shared the history of her childhood and love of her parents and siblings. For many years, Neoma carried on the tradition of the Hibbs Family Reunion. Neoma loved her four children, eight grandchildren and nine great-grandchildren above all else and always respected them for the choices they made and all were equal in her heart. Neoma is survived by son, Joe (Tina) Szady (Jordan) of Hilton Head, SC; daughters, Michaelene (George) Kesl (Mike, Kim & Kerri) of Scottsdale, AZ, Gail (Ann) Szady of Rochester, MN and Terri Anspaugh (Olivia, Adam & Arden) of Walkerton; and brother, Kenneth Hibbs of San Francisco, CA. She was preceded in death by her parents; husbands; brother, Wayne Hibbs; sisters, Neva Baughman, Hazel Watson and Opal Stahlbaum; and grandson, Joel Szady. Funeral services will be Tuesday, May 22, 2018 at 11:00 a.m. EDT at the Walkerton United Methodist Church with Pastor Perry Richards officiating. Burial will follow at the Woodlawn Cemetery, Walkerton. Visitation will be Monday from 4:00 p.m. to 8:00 p.m. EDT at Rannells Funeral Home, Koontz Lake Chapel and Tuesday at the church one hour prior to the service. To leave online condolences, visit rannellsfuneralhome.com.

Neoma Personette was born December 1, 1924 in Jasper County, IN to Harry and Grace (Long) Hibbs. She passed peacefully on Thursday, May 17, 2018 at St. Joseph Regional Medical Center, Plymouth, IN with family by her side after a cerebral hemorrhage... View Obituary & Service Information

The family of Neoma C. Personette created this Life Tributes page to make it easy to share your memories.

Send flowers to the Personette family.