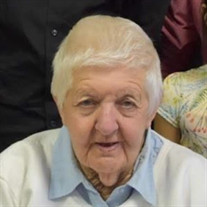 Wednesday, August 25th, Nedra Ann Maruska Williams is in the loving arms of her parents. She lost her parents at age eleven, which had a profound impact on her entire life. She is also reunited with her husband, Roy John Williams, her best friend, and love of her life. Nedra was active in the LaPorte County Democratic Party, manning the voting polls at the Johnson Township Hall for numerous elections. She and her husband were both in the Farm Bureau and enjoyed working and volunteering at the LaPorte County Fair. She was a community leader in Walkerton. She was one of the organizers of the Fourth of July Festival in Urey Park and the Pumpkin Festival. She was a member of the Walkerton American Legion Auxiliary. She enjoyed working at Stuntz Christmas Tree Farm in the kitchen. She was a strong supporter of John Glen Band Boosters during her son, Gregory’s, high school years.She was a Cub Scout Leader for many years. She was active in The Walkerton Businesswomen’s group. She was known for her cinnamon rolls that she made at Jacob’s Drug Store. Nedra enjoyed gatherings with her neighbors, family, and friends, especially for her birthday open house. Before her sight became obstructed, playing cards was her passion, she enjoyed gardening, taking care of her chickens and cats, and was a avid reader. She will be missed by numerous friends and family, especially, her son, Gregory J. Williams, her daughter-in-law, Debbie Williams, her granddaughter, Catherine Williams, her grandson, Adam Williams (Natasha Hall-Williams), her great-grandsons, Conor, Samual Dycus and Jonathan Hall, and her great-granddaughters, Anastazia Pedraza and Claire Williams. Visiting hours will be from 3:00 to 6:00 EDT Wednesday September 1, 2021 at the Rannells Funeral Home, Koontz Lake Chapel. A Celebration of Life Service will be held at 6:00 EDT Wednesday September 1, also at the Funeral Home. Cremation will take place following the services with a private Graveside Service at a later date. In lieu of flowers the family requests memorial contributions to go to Giving Hearts 600 Roosevelt Rd. Walkerton, IN 46574. Her family would like to thank the nurses and medical professionals at Northwest Health in LaPorte.

Wednesday, August 25th, Nedra Ann Maruska Williams is in the loving arms of her parents. She lost her parents at age eleven, which had a profound impact on her entire life. She is also reunited with her husband, Roy John Williams, her best friend,... View Obituary & Service Information

The family of Nedra Ann Williams created this Life Tributes page to make it easy to share your memories.

Wednesday, August 25th, Nedra Ann Maruska Williams is in the...

Send flowers to the Williams family.