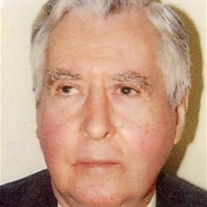 WALKERTON-Milton Forrest Hughes died peacefully in his sleep on Dec. 21, nine days short of his 91st birthday. He was in his cozy home in Walkerton, Ind., with loved ones nearby. Throughout his long life he viewed family as the most priceless gift of all. He was preceded in death by his parents and his only brother, Bob. He was born in Missouri to Maurice and Ethel Hughes. In 1945 he graduated from Culver Naval School, in 1946 from high school, and in 1950 from Harvard College, graduating Magna Cum Laude and Phi Beta Kappa. Forever a learner, he attended numerous graduate programs operated under the National Defense Education Act. Feeling his patriotic duty to serve but held back by legal blindness, he earned advanced degrees in foreign language and taught many students who pursued careers in National Defense. In 1953 he married Phyllis Jeanette Egbert. She has been his wife of 65 years, one day short of 66 years on the day he died. They raised three children-- Paul (a resident of California), Amy (married to Paul Hernandez, living in Indiana) and Sam (married to Ceci Rog and living in Missouri). Milton felt very lucky to have two fantastic grandchildren, Chelsea (with Howard, living in Wisconsin) and Si (living in Indiana.) Mr. Hughes had been a teacher of Literature, English, Russian and German. He taught in public and private schools and at the junior college and college levels. His career spanned the Cold War, and as he taught foreign languages he placed an accent on imparting to his students the positive cultural contributions of the then-current (Russia) and former (Germany) adversaries of the U.S. by sharing their music, lore, and costume. Privately he also studied deeply the historic mistakes and atrocities that took place under Stalin and Hitler. Learning and teaching were life-long passions. Students remember him for being fun and vibrant with games and foreign-language folk songs that enriched the cultural aspects of the nation they were learning about. He was a gifted musician, and his skill playing harmonica was truly amazing. Besides music he rounded out his educational role with sports, teaching sailing, and organizing clubs like the Bike Club. Milton had a limitless interest in the cultures of the world, as evidenced by his love of travel and leading students across Europe, thoroughly immersing them in the new country by staying with local hosts. He brought home color slides from his travels in Europe, enriching his family members’ lives with a worldview that included Bavarian villages, saltmine waterworks, and fairytale castles. Family trips to the Catskills, national parks, and the family’s tree farm in Florida were enlivened by everyone singing German folks songs accompanied by his virtuosity on harmonica. At home in rural western Missouri in his early years as a father he served his children and their cousins as guide on long bike rides through the backroads, where he regaled with stories of the exploits of the outlaw Jesse James and Cole Younger gangs, who rode in the area a century earlier, and pointed out the log-cabin cellars where they hid out from federals and where the train robbers might have buried their loot. An inventive storyteller, he told tales made up usually extemporaneously, delighting his and any other children nearby. He spun epic adventures that took place in the woods and fields where his children grew up, featuring their own kin as the heroes and complete with songs to accompany the stories: Uncle George, a dairy farmer who lived down the road, became a knightly St. George who fought the dragon Mampoo Patten, with George’s (fictional) brave and loyal hounds; Jerden, Teague, and Sir Anselew by his side. As progressive blindness took hold he found ways to thrive intellectually and keep growing through Talking Books and documentaries. By age 50, with no vision remaining, he got around and met people, his Seeing Eye dogs, Lady and Davey his trusty guides. Together in the city they walked 1200 miles a year. He always had a phenomenal memory and gleaned history and background from everything he read, everyone he talked with, and everywhere he traveled. Up to the end he had a passion to create and a drive to share insights from his vast and divergent wealth of knowledge with anyone he encountered. He requested that he have no funeral, but rather, when the time comes, that his ashes be co-mingled with those of his beloved Phyllis. There will be a small memorial service when they are re-united.

WALKERTON-Milton Forrest Hughes died peacefully in his sleep on Dec. 21, nine days short of his 91st birthday. He was in his cozy home in Walkerton, Ind., with loved ones nearby. Throughout his long life he viewed family as the most priceless... View Obituary & Service Information

The family of Milton F. Hughes created this Life Tributes page to make it easy to share your memories.

Send flowers to the Hughes family.