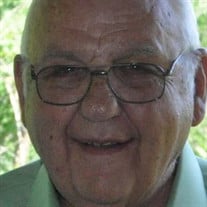 WALKERTON-Merle Dean Schaunaman, 89, passed away Friday, November 22, 2019 at Catherine Kasper Life Center, Donaldson, IN. Merle was born August 27, 1930 in Aberdeen, SD to Frederick and Ida (Stucke) Schauanman and lived in the area for 65 years, coming from Three Rivers, MI. On November 4, 1950 at Koontz Lake, IN, he was married to the former Emily A. Stull, who preceded him in death. He was also preceded in death by his parents and two brothers, Vern and Clinton Schaunaman. On January 6, 2001 at Koontz Lake, IN, he was married to the former Shirley Ann Hazel, who survives. Also surviving are two daughters, Pamela Cable and Cathy (Paul) Cleveland; two grandchildren, Jason Cleveland and Heather Rauen; six great-grandchildren, Cole, Alec, Bryce, Aksel, Tarren and Joie; two step-daughters; two step-sons; and four step-grandchildren. Merle was a retired tool & die maker. He attended Koontz Lake Missionary Church and was a retired 40 year member of the Koontz Lake Volunteer Fire Department. He was also a former Oregon Township Advisory Board member. Funeral services will be Monday, November 25, 2019 at 12:00 noon EST at the Koontz Lake Missionary Church. Burial will follow at the Grovertown Cemetery. Visitation will be Monday at the church from 10:00 a.m. to 12:00 noon EST. In lieu of flowers, memorial contributions may be given to the Koontz Lake Volunteer Fire Department. Rannells Funeral Home, Koontz Lake is handling arrangements.

The family of Merle D. Schaunaman created this Life Tributes page to make it easy to share your memories.

Send flowers to the Schaunaman family.