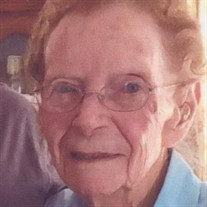 HAMLET-Mary K. Schultz, 97, passed away Tuesday, July 31, 2018, in her home. Mary was born July 5, 1921, in New Paris, IN to Jess and Carrie ( Welty) Young and lived in the area 62 years, coming here from Chicago Heights, IL. She was a homemaker and a member of the St. Matthew Lutheran Church. On July 5, 1942, in Lansing, IL she was married to Reynolds Schultz who preceded her in death on December 1, 1992. She was also preceded in death by her parents; grandson, Roger Taylor; three sisters, Maxine Sellers, Jessie Martin & Kathy Anderson; one brother, Bill Young; daughter-in-law, Laurie Schultz; and special friend, Bob Conrad. Survivors include one daughter, Brenda (Wayne) Stoneburner of Hamlet; two sons, Kenny (Pam McCarty) Schultz of Hanna and Gary Schultz of Englewood, CO; eight grandchildren, 11 great-grandchildren and extended family. Funeral services will be Saturday, August 4, 2018, at 1:00 p.m. CDT at Rannells Funeral Home, Hamlet Chapel. Burial will follow at Fletcher Cemetery in Hamlet. Visitation will be Saturday at the funeral home from 10:00 a.m.-1:00 p.m. In lieu of flowers, memorial donations may be given to VNA Hospice in Valparaiso.

The family of Mary K. Schultz created this Life Tributes page to make it easy to share your memories.

Send flowers to the Schultz family.