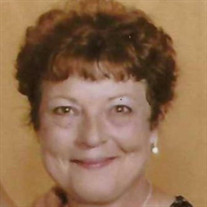 WALKERTON – Mary Jo (Keiser) Ross of Walkerton passed away on Thursday, March 3, 2022 in her home following a sudden illness. She was born on September 17, 1955 in Knox to Bruce “Ken” and Wanda “Jean” Keiser Sr. She was 66 years-old at the time of her death. Mary lived in the area her entire life and was a retired Postal Clerk at the Grovertown, Knox, Walkerton, North Liberty, and Lakeville Post Offices. She was also a substitute Postal Worker all over the northern third of Indiana. On July 16, 1983 in Logansport, IN she married the love of her life Mark Ross. Mary enjoyed gardening, baking, bee keeping with her father, and antiquing, and she was an avid reader. Most of all she was a kind, generous, caring soul who cherished her entire family dearly. She is survived by: husband Mark Ross of Walkerton; one son Joe Ross of Walkerton; one daughter Jeannie (Seth) Cooper of Indianapolis; her father Bruce “Ken” Keiser Sr., of Knox; four sisters Sandra Dunek of Attica, IN, Patti (Mark) Scaggs of Knox, Paula (Dean) Corey of Knox; and Allison (Steve) Mroczkiewicz of Attica, IN; and a host of extended family and friends that all meant the world to Mary. She is preceded in death by her mother and two brothers Bruce Keiser Jr. and Perry Keiser. Visiting hours will be from 4:00 to 6:00 CST Tuesday, March 8, 2022 at the Rannells Funeral Home, Hamlet Chapel. Funeral Services will be at 11:00 CST Wednesday, March 9, 2022, also at the funeral home with Visiting Hours also one hour before the Funeral. Burial will follow at Tyner Cemetery

The family of Mary Jo (Keiser) Ross created this Life Tributes page to make it easy to share your memories.

WALKERTON – Mary Jo (Keiser) Ross of Walkerton passed away on...