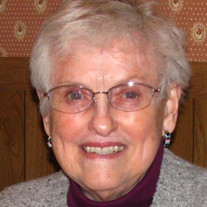 WALKERTON- Mary Lou (Widup) Hiatt passed away in Walkerton, Indiana on April 18, 2019. She was born in Kewanna on March 25, 1927 to Cyril and Mildred (Costello) Widup. She moved to Walkerton in 1943 and graduated from Walkerton High School in 1945. She graduated from the South Bend College of Commerce in 1946. On October 12, 1946, she married Branson Hiatt in South Bend and they lived together in Walkerton for the next 72 1/2 years. She worked with Branson in his insurance and real estate businesses until they retired in 2001. Mary Lou was a member and leader of 4-H and the Better Homes Extension Club. She was a talented seamstress, making most of the clothes for herself and her children, including her two daughters' wedding dresses. She enjoyed interior decorating; wallpapering, furniture refinishing and making the drapes for her home. She also enjoyed bowling in leagues at Walkerton and North Liberty and traveled extensively with her husband, visiting 49 states. She was an active member and past secretary of the Walkerton Area Historical Society and she attended the Walkerton United Methodist Church. She was preceded in death by her parents; her step-father Harold Lehman; her step-mother Winnie (Siefert) Widup; her brother Paul Widup; sisters Betty Parcel and Judy Lees; grandchildren Stephen Sherland and David Sherland. She is survived by her husband and her children, Marilyn (Chuck) Sherland of Walkerton, Bill (LaVerne) Hiatt of Hendersonville, NC and Nancy (John) Turner of Walkerton; grandchildren Angela (Ken) Swank of North Liberty, Laura Lambert of Henderson, NV, Annette Hiatt of Chapel Hill, NC, Diana (Tom) Hawkins of Fort Wayne; Sarah (Yale) Rice of Bend, OR and seven great-grandchildren. Also surviving are brother, Jim (Eunice) Widup of Billings, MT; step-sisters Terri (Glenn) Pipes of Midland, TX, Ruby (Ted) Ondo of Worland, WY and Cyrilin Green of Tucson, AZ; step-brother Merlin (Val) Widup of Cape Coral, FL; brother-in-law Kermit Parcel of Winamac and several nephews and nieces. Funeral services will be Tuesday, April 23, 2019 at 11:00 a.m. EDT at the Walkerton United Methodist Church. Burial will follow at the Woodlawn Cemetery, Walkerton. Visitation will be Monday evening from 4:00 p.m. to 8:00 p.m. EDT at Rannells Funeral Home, Koontz Lake Chapel and Tuesday at the church one hour prior to the service. In lieu of flowers, memorial contributions may be given to the Walkerton Area Historical Society or the Walkerton United Methodist Church.

WALKERTON- Mary Lou (Widup) Hiatt passed away in Walkerton, Indiana on April 18, 2019. She was born in Kewanna on March 25, 1927 to Cyril and Mildred (Costello) Widup. She moved to Walkerton in 1943 and graduated from Walkerton High School... View Obituary & Service Information

The family of Mary Lou Hiatt created this Life Tributes page to make it easy to share your memories.

Send flowers to the Hiatt family.