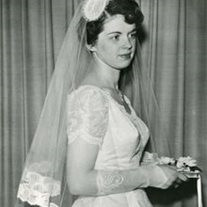 KOONTZ LAKE- (Martha) Carol Finley, 75, of Koontz Lake, died at 9:45 a.m. Wednesday, March 21, 2012 at home after a lingering illness. Martha Carol Brown was born September 6, 1936 to Arthur and Martha (Thomson) Brown in Indianapolis. Her family moved to Marion, where she was graduated from Marion High School in 1954. She continued her studies at St. Joseph Hospital School of Nursing in Fort Wayne, where she was inducted into Honor Society of Nursing, Sigma Theta Tau. On May 20, 1956, in Marion, she married Benjamin H. Finley, who survives. Together they had four children, three sons and one daughter, who also survive: Andrew (and Cindy) Finley, Gloucester, VA; David (and Mary Jo) Finley, Plymouth; Paul Finley (and fiancée Denise Pierce) of Crestview, FL and Julie (and Tom) Hupp, South Bend. Also surviving are seven grandchildren: Nathan (and Genise) Finley, Cheboygan, MI; Joshua (and Jamie) Finley, Portsmouth, VA; Ashleigh (and Kurt) Hanby, South Bend; Christa Finley, Burlington, VT; Allison Finley, Plymouth; Andrea Finley, Plymouth; Levi Finley, Port St. Joe, FL and numerous nieces and nephews. She was preceded in death by her sister, Jenny Hipskind, and brother, Arthur Brown. Accepting Christ at a young age, she was a member of the Koontz Lake Missionary Church for more than 50 years. A quiet, gentle spirit, she studied her Bible voraciously and was a well-known prayer warrior, who many counted on for spiritual support. She taught Sunday school, coached the youth Quiz Team, traveling to Missionary churches throughout the district, and lovingly cared for the babies and toddlers in the Nursery. After her children went to school, Carol was a nurse for 26 years, practicing at the Walkerton Clinic, Miller's Merry Manor, Walkerton, and providing home care. She hand-lettered school buses, and she and Ben bred cocker spaniels. Creative and clever, art played a big role in Carol's life; she loved to paint with oils and acrylics. She also enjoyed crocheting uncountable afghans for family and friends and their babies. Her God-given green thumb facilitated her love of plants and flowers. Visitation will be Sunday, March 25, from 4:00 to 8:00 p.m. (Eastern Time) at Rannells Funeral Home, Koontz Lake Chapel. Funeral services will be Monday at 11:00 a.m. ET at the Koontz Lake Missionary Church with calling at the church on Monday from 10:00 a.m. until services. Memorial contributions may be made to the Koontz Lake Missionary Church, the Center for Hospice, or the Multiple Myeloma Research Foundation.

The family of Martha "Carol" Finley created this Life Tributes page to make it easy to share your memories.

Send flowers to the Finley family.