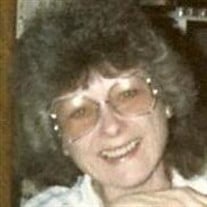 HAMLET-Marilyn L. Nowatzke, 69, passed away Wednesday, August 15, 2018 at Miller's Health & Rehabilitation, LaPorte, IN. Marilyn was born October 25, 1948 in Manistique, MI to Leonard and Margaret (Selby) Loehr and lived in the area since 1970, coming from Michigan. On July 3, 1971 at Walkerton, IN, she was married to Donald L. Nowatzke, who survives. Also surviving are one daughter, Darcie Cichon of LaPorte; two sons, Dale (Dawn) Nowatzke of Hamlet and Mike (Julie) Toth of Chesterton; seven grandchildren, Jaron Lazo, Cameron Bailey, Trey Major, Emelia Kilgore, Owen Kilgore, Jacob Toth and Drew Toth; three great-grandchildren; two brothers, Gary Loehr and Donald Loehr, both of Curtis, MI; and three sisters, Shirley Lute of Walkerton, Judy Wallace of Curtis, MI and Dora Soder of Curtis, MI. She was preceded in death by her parents; two brothers; and two sisters. Marilyn was a retired office clerk for the Walkerton Elementary School. She was a U.S. Marine Corp veteran and a former member of the Kingsford Heights American Legion Post #434. A memorial service will be held Saturday, August 25, 2018 at 3:00 p.m. CDT at Rannells Funeral Home, Hamlet Chapel. Burial will follow at the Fletcher Cemetery, Hamlet. A gathering of family and friends will be held at the funeral home prior to the service on Saturday the 25th from 1:00 p.m. to 3:00 p.m. CDT. In lieu of flowers, memorial contributions may be given to Kingsford Heights American Legion Post #434.

HAMLET-Marilyn L. Nowatzke, 69, passed away Wednesday, August 15, 2018 at Miller's Health & Rehabilitation, LaPorte, IN. Marilyn was born October 25, 1948 in Manistique, MI to Leonard and Margaret (Selby) Loehr and lived in the area since 1970,... View Obituary & Service Information

The family of Marilyn L. Nowatzke created this Life Tributes page to make it easy to share your memories.

Send flowers to the Nowatzke family.