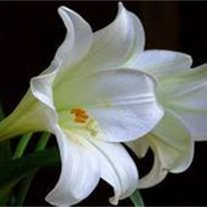 HAMLET-Marguerite "Marge" E. Schwenk, 91, of Valparaiso, formerly of Hamlet, passed away Monday, April 2, 2012 in Porter Health, Valparaiso Hospital. Marge was born May 9, 1920 in Brooklyn, New York to John and Marguerite (Williams) Doran and lived in Hamlet from 1947-2007. On June 29, 1947, in New York, she was married to Raymond J. Schwenk, who preceded her in death in 1996. She was also preceded in death by her parents, one sister and two brothers. Survivors include two daughters, Patricia (Michael) Gillies of Reston, VA and Mary Jo (Ken) Williams of Valparaiso; two sons, Mike (Elaine) Schwenk of Miller Place, NY and David (Bonnie) Schwenk of Koontz Lake; six grandchildren, Michael Schwenk, Rogan Gillies, Grady Gillies, Brett (Allison) Gillies, Blake Williams and Katelyn Schwenk and three brothers, Joseph Doran of New York, Frank Doran of Nevada and Lawrence Doran of Florida. Marge was a homemaker and a member of Holy Cross Catholic Church, Hamlet. She was a former Starke County 4-H Leader and a past member of the Better Homes Extension Club, the Hamlet Ladies Golf League, the Altar Rosary Society and the Hamlet American Legion Ladies Auxiliary. Wednesday, April 4, 2012 visitation will be from 4:00 to 7:00 p.m. (Central Time) at Rannells Funeral Home, Hamlet Chapel. A Funeral Mass will be held Wednesday at 7:00 p.m. at Holy Cross Church, Hamlet. On Thursday, April 5, visitation will be from 10:00 a.m. to 11:00 a.m. at the funeral home with a Rosary Service Thursday at the church at 11:00 a.m. A graveside service will be held Thursday at 3:00 p.m. at Holy Cross Cemetery. In lieu of flowers, memorial contributions may be given to the Alzheimer's Association.

The family of Marguerite "Marge" Schwenk created this Life Tributes page to make it easy to share your memories.

Send flowers to the Schwenk family.