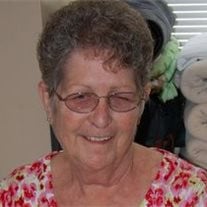 Linda L. (Ruby-Bell) Rupchock, 71, passed into God's loving arms surrounded by her loving family on Friday, August 26, 2011 in her home. Linda was born June 19, 1940 in Walkerton, Indiana to Harold "Towhead" and Lela (Holderread) Ruby and lived in the area all of her life. On March 9, 1985 in Walkerton she was married to David L. Rupchock, who survives. Also surviving are six daughters, Cindy (Jake) Kaser of Plymouth, Tammy (Don) Parker, Julie Cassady, Jane Bell, Chris Norem and Tina (David) Dickinson, all of Walkerton; twenty-three grandchildren; sixteen great-grandchildren; one great-great grandchild; two brothers, Harold John (Sally) Ruby of Argos and Rick (Gerri) Ruby of Walkerton and several nieces and nephews. She was preceded in death by her parents; one step-daughter, Angel Rupchock; one great-grandchild, Avery Norem and one brother, Kenneth Ruby. Linda was a former employee of Wells Aluminum In North Liberty. Many will remember her from her last place of employment, The Crock Pot in Walkerton. Funeral services will be Tuesday at 2:00 p.m. (Eastern Time) at the Walkerton United Pentecostal Church with Pastor Arnold Smith officiating. Burial will be at the Woodlawn Cemetery, Walkerton. Friends may call at the Walkerton United Pentecostal Church, Monday from 4:00 to 8:00 p.m. and Tuesday 1:00 p.m. until the time of services. In lieu of flowers, memorial contributions may be given to Riley Children's Hospital, Indianapolis. Rannells Funeral Home, Koontz Lake Chapel is handling arrangements.

The family of Linda L. Rupchock created this Life Tributes page to make it easy to share your memories.

Send flowers to the Rupchock family.