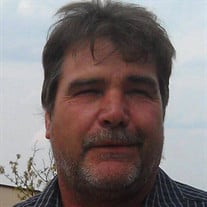 MEDARYVILLE-Leroy “Big Mac” Rater, 64, passed away Monday, April 22, 2019 at his home. Leroy was born June 5, 1954 in Winamac, IN to Leroy “Roy” and Virginia (Schultz) Rater and lived in the area all of his life. On May 28, 1983 in Medaryville, he was married to the former Susie Shepperd. Survivors include his wife, Susie; three daughters, Tina Cantu of Iowa, Carrie Oliver and Jenny Rater, both of Rensselaer; three sons, Philip Rater of Medaryville, Leroy “Little Mac” Rater of Michigan City and Kanyon Whitrock of Medaryville; 22 grandchildren; nine great-grandchildren; and four sisters, Jeannie Nelson of Logansport, Gerri Rater of Winamac, Linda Kucera of Bourbon and Peggy Riddle of Akron. He was preceded in death by his parents and brother, Robert. Leroy was a member of Souls Harbor Church of North Judson. He owned and operated Leroy’s Tree Service. He was an avid hunter, fisherman and basketball fan. He was a true man of God that would drop everything to help anyone, including being a missionary for inmates at the county jails and feeding the homeless across the U.S. Funeral services will be Saturday, April 27, 2019 at 11:00 am EDT at Souls Harbor Church, North Judson. Burial will follow at the White Post Cemetery in Medaryville. Visitation will be Friday at the church from 2:00 pm to 9:00 pm and Saturday one hour prior to the service. In lieu of flowers, memorial contributions may be given to the Souls Harbor Church. Rannells Funeral Home, Hamlet Chapel is handling arrangements.

The family of Leroy "Big Mac" Rater created this Life Tributes page to make it easy to share your memories.

Send flowers to the Rater family.