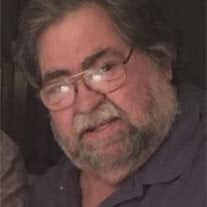 KOONTZ LAKE-Leonard Anthony Ricciardi, 66, passed away Friday, June 1, 2018 at The Department of Veterans Affairs Hospital, Ft. Wayne, IN. Mr. Ricciardi was born January 23, 1952 in Chicago, IL to Louis and Mary (Laperuto) Ricciardi and lived at Koontz Lake for 26 years, coming from Chicago. He was the owner of the former Dockside Inn at Koontz Lake. He was a U.S. Air Force veteran and a former member of the Hamlet American Legion. On April 23, 1983 in Westchester, IL, he was married to the former Laurel Peckat. Survivors include his wife, Laurel; two sons, Louis (Alexandra) Ricciardi and Leonard (Sarah) Ricciardi; one grandson, Mason Ricciardi; and many cousins. He was preceded in death by his parents and sister, Mary Jean Ricciardi. A memorial service will be held Sunday, June 10, 2018 at 3:00 p.m. CDT at Rannells Funeral Home, Koontz Lake Chapel. Visitation will be Sunday at the funeral home from 1:00 p.m. to 3:00 p.m. CDT. An Interment Service will be Monday, June 11, 2018 at 11:00 a.m. CDT at Chapel Hill Gardens West, 17 W 201 Roosevelt Rd., Oakbrook Terrace, IL 60181. In lieu of flowers, memorial contributions may be given to the family. To leave online condolences, visit rannellsfuneralhome.com.

The family of Leonard A. Ricciardi created this Life Tributes page to make it easy to share your memories.

Send flowers to the Ricciardi family.