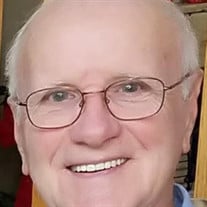 December 15th, 1942 / October 27th, 2021 Larry Lee Wood, age78, passed away on October 27th, 2021, due to a sudden illness. He was surrounded by his family at Wayne Hospital in Ohio. Larry was born in LaPorte, IN to Dorothy and Willard Wood on December 15th, 1942. He attended and graduated from Kingsbury High School in 1960. After graduation Larry started his studies at DePaul University in Illinois. He then went on to work as a Police Officer in LaPorte. Along with this he delivered for and worked on the floor at Schlitz Beer. He eventually started working at National Can and spent many years working for them. Larry’s faith and love for Jesus lead him to eventually attend LaSea Ministries to become an ordained minister. Larry had a huge smile and a huge love for all people. His smile lit up the room and his hugs are widely known as the best around. When he wrapped his arms around you, it felt like the safest place in the world. He had a mission to make sure that everyone he crossed paths with knew that Jesus loved them. Larry had a huge love for family, enjoyed fishing, making crafts with his wife and being involved at his church at Ithaca Open Bible. Larry is survived by his wife Mary Wood, 8 children of his own and 5 kids thru marriage. They are Allison (Bob) Clark, Lori Fortlander, Dawne (Al) Cowgill, Larry (Michelle) Wood, Hollie (Matt) Sanderson, Bret Lott, Melanie Strain, Melinda (Jeff) South, Jeremy Rosier, Shawna Rosier, Amy Reeder, Heather Glenn, and Jennifer Blanton. Together they have 23 grandchildren and 15 great grandchildren. Larry was preceded in death by his parents, his sister Gennean Kirkham, and his wife Cynthia Wood. A celebration of life gathering will take place at Rannells Funeral Home located in Koontz Lake, IN. A viewing for family & friends will be held on Friday, November 5, from 11:00 to 1:00 (Central Time) and the funeral service will be held immediately following. After the burial service, there is a gathering to be held at the Walkerton Legion. A second celebration of life will be held at a later date in Larry’s hometown of Greenville, OH.

December 15th, 1942 / October 27th, 2021 Larry Lee Wood, age78, passed away on October 27th, 2021, due to a sudden illness. He was surrounded by his family at Wayne Hospital in Ohio. Larry was born in LaPorte, IN to Dorothy and Willard Wood... View Obituary & Service Information

The family of Larry Lee Wood Sr created this Life Tributes page to make it easy to share your memories.

Send flowers to the Wood family.