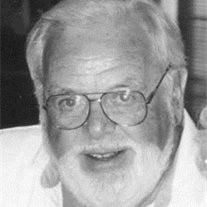 HANNA-LaVerne "Bud" Rosenbaum, 84, passed away peacefully Friday, October 21, at LaPorte Hospital surrounded by his family. Bud was a deeply faithful Christian, a member of the First Lutheran Church in Hanna and a man of great integrity. Bud was born on July 15, 1927, to Clarence Rosenbaum and Hertha Hundt Rosenbaum. After receiving his high school diploma from Hanna School, Bud served in the U.S. Navy where he was a Seaman First Class. After his naval service he married Normalee Carlson Johnson on February 13, 1948. They lived in Hanna during the entire 62 years of their marriage. There they raised two daughters, Marylee and Susanne. Bud was a hard working man, working during high school on the railroad and for 34 years after the Navy as a machinist at Allis Chalmers where he was a leader in the United Auto Workers. He worked as a high school basketball referee during the Allis Chalmers years; after retiring he worked as a Rural Route Postal Carrier and a school bus driver. As a young man, he played golf, softball and baseball. He loved sports of all kinds, both as a participant and fan, but especially loved the Chicago Cubs. He and Normalee traveled all over the country and even into Canada to watch their beloved Cubs and could entertain a roomful for hours with tales of friends they made in the bleacher section and chance meeting with Cubs greats. They also loved to travel and managed to visit nearly every state in the Union before settling in their later years on Biloxi, Mississippi, as the perfect spot for a couple of snow birds. Everywhere they went they made lifelong friends and collected wonderful stories about colorful characters they encountered. Bud believed in giving back to his community, and for many years delivered meals for Meals-on-Wheels and served as a flu shot volunteer for the VNA. He was a charter member of the Hanna American Legion where he served for 65 years. Bud was preceded in death by his parents, his beloved wife Normalee, his daughter Marylee, and his sister Kathryn Rosenbaum. He is survived by his daughter Susanne Knutsen of Hanna, grandson John Mockler of LaPorte, granddaughter AnnaLee Jacobs and husband Mark of Union Mills, great-grandchildren Mazielee Joy Jacobs and Cole Xaivier Jacobs, also of Union Mills, his brother Dan Rosenbaum and wife Janet of LaPorte, his sister Karolyn Mills of Hanna and several nieces and nephews. A funeral service will be held at the First Lutheran Church in Hanna at 2:00 p.m. (Central Time) on Wednesday, October 26, with visitation one hour prior to the service. A graveside military service will be held at Hanna Cemetery following the service. Memorial contributions can be made to the First Lutheran Church in Hanna. Rannells Funeral Home, Koontz Lake Chapel is handling arrangements.

HANNA-LaVerne "Bud" Rosenbaum, 84, passed away peacefully Friday, October 21, at LaPorte Hospital surrounded by his family. Bud was a deeply faithful Christian, a member of the First Lutheran Church in Hanna and a man of great integrity. Bud... View Obituary & Service Information

The family of LaVerne "Bud" Rosenbaum created this Life Tributes page to make it easy to share your memories.

Send flowers to the Rosenbaum family.