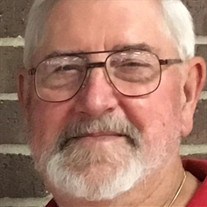 Kenneth L. Kemble was born December 16, 1943 in Knox, Indiana to Harry and Amanda Kemble. Ken was the youngest of four siblings: Gene, Marlene (Griffith) and Bob. Ken’s heart was captured by his high school sweetheart Eileen Hasnerl. She would become his best friend and wife for 55 incredible years. Ken and Eileen had two children, Kurt and Kelly (Manning). They were his pride and joy, and blessed him with five grandchildren, who endearingly called him Papa. Kurt and his wife Shelly have two children, Taylor and Hunter. Kelly and her husband, Anthony Manning, have three sons: Kemble, Harrison and Gabriel. Family meant everything to Ken. For him it was defined by love and friendship, not just by blood. Ken welcomed everyone into his family- it didn’t matter who you were, or what you needed, he was always there. He was Papa, Uncle, or Brother to many and a friend to all. He was a 1962 graduate of Knox High School where he was honored in the Hall of Fame as a standout athlete in basketball and track. He held the KHS high jump record in track. He was a member of the 1961 basketball team with the most wins in school history, and the first Knox basketball team to win a Regional championship in 1962. Ken went on to play basketball at Penn State University, where he received his undergraduate degree in Education. He later received a Masters of Science from Purdue University. Ken worked for the Knox Community School Corporation for 37 years, where he made an impact on the lives of countless students as a coach and teacher. He had both patience and nerves of steel, teaching half of Knox how to drive in Driver’s Ed class. He was respected and loved by his coworkers. He also served as a Washington Township Volunteer Fireman, Washington Township Advisory Board Member, Hunting Guide for Turkey Tracks and a SCYC Radiothon Volunteer. After retiring from KHS, Ken never stopped teaching. He turned the outdoors into his classroom, where his passion for hunting, fishing, gardening, and golfing came together. As a mentor, he was willing to give support and advice in the best way that he could. Passing along his knowledge and wisdom to others was one of his lifelong callings. He was also the proprietor of Kemble’s Deer Processing, where friends were family and the hunting stories were long (and not always true)! He was preceded in death by his parents, and brothers Gene and Bob Kemble. Ken leaves behind a loving wife, a caring sister, children, and grandchildren, nieces and nephews, along with other family, numerous friends, and countless students, all whose lives were made better having him in it. A Celebration of Life Service will be held Sunday March 10, 2019 at 5:00 pm CDT at the Knox United Methodist Church where there will be a gathering of friends prior to the service at the church from 2:00 pm to 5:00 pm. In lieu of flowers, please direct memorial contributions to his favorite organizations: The Eric Corey Foundations Turkey Tracks and/or The Starke County Youth Club. Rannells Funeral Home, Hamlet Chapel is handling arrangements.

The family of Kenneth L. Kemble created this Life Tributes page to make it easy to share your memories.

Send flowers to the Kemble family.