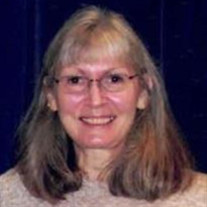 GROVERTOWN – Julie Ann (Guyse) Harness, 66 years-old of Grovertown, IN, passed away at home on Friday, January 8, 2021 following a battle with breast, bone, and liver cancer. Julie was born to Eugene and Audrey Guyse on August 1, 1954 in Plymouth, IN, where she attended school and graduated from Plymouth High School in 1973. On March 6, 1976 Julie married Steven A. Harness in Plymouth at the Church of Christ. They later purchased a home and settled in Grovertown where they raised one son. Over the years Julie worked at numerous downtown Plymouth stores such as Bosworth’s House of Fabrics, and Swearingin’s. She developed relationships with so many of the people she worked with; a lot of really good people she said. In fact, she met Steve at Bosworth’s while she was decorating their windows. That’s what she had been hired in to do and she loved that position. On the weekends she would be a clerk. She also helped out at Kings Kiddy College and thoroughly enjoyed working with the children. Her final position was working the cafeteria at Oregon-Davis schools, both at the elementary and high school. IN the late 80’s Julie started working out at a gym and took up bodybuilding. Soon she was encouraged to start entering competitions, and was so proud of winning the title of NPC (National Physique Committee) World Gym Classic Bodybuilding Championship in the Women’s Heavyweight Division in 1990. Julie enjoyed gardening and baking. Her Cheesecake became a coveted desert by family members every year on Christmas Day. She remembered everybody’s birthday and always sent a card with a beautiful hand-written note. Julie was a lot like her mother in that she always found the good in people. She was strong with her faith in God. She was a member of Grovertown United Methodist Church for many years. When that church closed, she and Steve became members of the Hamlet United Methodist Church. Steve and Julie were always taking in stray and needy cats and dogs. They enjoyed shopping for bargains at Goodwill stores and watching Hallmark movies together. She was preceded in death by her parents Eugene Paul and Audrey Elizabeth (Born) Guyse; her father-in-law Marion ‘Cy” Harness; and a nephew Alex Guyse. Julie is survived by her loving husband of 44 years Steven Harness; one son Jeffery (Kay Croy) Harness of LaPorte, IN; two brothers John Guyse of Plymouth, IN and Stephen (Lisa Huber) Guyse of Lakeville, IN; one sister Lori Ann (Steven) Hollett of Plymouth, IN; mother-in-law Gloria Harness of Miller’s Merry Manor in Culver, IN; one brother-in-law Jim Harness of Hamlet; along with many nieces Sarah and Scott Andrews of North Judson, IN, Mary Ann Hollett of Plymouth, IN, Chelsea (Jay Timmons) Bridgman of Warsaw, IN; and two nephews Anthony Guyse of Bremen, IN and Caleb Bridgman; along with many cousins. Julie and her late cousin Kenji Born always felt more like siblings, and her uncle George Born was like a second father to her. Close friends that Julie considered to be her family include Kimberly Auman and her two children Julie Anne (Julie’s namesake) and Jacob, as well as “adopted son” Joshua Young who is Kimberly’s brother, Duretta Yoquelet, Linda Croy, Joyce Brucker, Susan Schiller, and Jeanette Czekala. Prior to her passing she expressed that she wanted to thank all of the staff from Oncology in Plymouth, IN and Dr. Bilal Ansari. A Memorial Service will be held at 5:00 CST Wednesday, January 20, 2021 at the Hamlet United Methodist Church where a Gathering of Family and Friends will also be held from 4:00 to 5:00 CST Wednesday, also at the church. Memorial contributions may be made to the Center for Hospice Care and Best Friends Animal Society at www.bestfriends.org. Due to the Covid-19 pandemic all CDC, Indiana and Starke County Health Department mandates and guidelines regarding attendance, face coverings and social distancing must be followed.

GROVERTOWN &#8211; Julie Ann (Guyse) Harness, 66 years-old of Grovertown, IN, passed away at home on Friday, January 8, 2021 following a battle with breast, bone, and liver cancer. Julie was born to Eugene and Audrey Guyse on August 1, 1954... View Obituary & Service Information

The family of Julie Ann Harness created this Life Tributes page to make it easy to share your memories.

Send flowers to the Harness family.