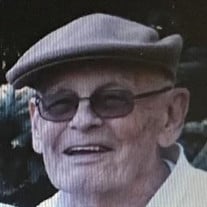 WAKARUSA- John Edward Bluhm, 90, of Wakarusa passed away peacefully at 4:40 PM Sunday, November 22, 2020 at Miller’s Merry Manor, Wakarusa with his family by his side. He was born November 28, 1929 to the late Ralph Edward and Marion (Bell) Bluhm. On May 7, 1950 he married Patricia Sebens who preceded him in death on April 28, 2019 after nearly 70 years of marriage. He is also preceded in death by a daughter Theresa Miller and a grandson Marvin Calhoun. He retired from the Indiana State Police after many years of service. John was also a communication specialist for the Indiana Toll Road, a lifelong member of the Masonic Lodge, a member of the Methodist Church, was an avid camper who loved bluegrass festivals and traveling in their motor home. John is survived by his children Donna and James Chatfield of Maryland, Duane and Ann Bluhm of Virginia, Mark Bluhm of Elkhart, Christina and Jerry Callahan of Goshen, Shonda Nolan of Elkhart, Sherry and Larry Lundgren of Rolling Prairie, Shelly Bluhm of North Carolina, Shirin and Mike Reum of Elkhart, Michelle and Dave Ivy of Elkhart, Lori Boss of Ohio, Donna Burgett of Elkhart, 25 grandchildren and countless great grandchildren. A private family Celebration of Life Ceremony will be held at a later date. Memorial contributions may be given to Miller’s Merry Manor, 300 N. Washington ST, Wakarusa, IN 46573.

WAKARUSA- John Edward Bluhm, 90, of Wakarusa passed away peacefully at 4:40 PM Sunday, November 22, 2020 at Miller&#8217;s Merry Manor, Wakarusa with his family by his side. He was born November 28, 1929 to the late Ralph Edward and Marion... View Obituary & Service Information

The family of John E. Bluhm created this Life Tributes page to make it easy to share your memories.

Send flowers to the Bluhm family.