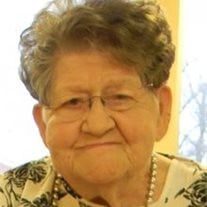 WALKERTON-Jessie Schaeffer, 87, passed away Sunday, June 16, 2013 at Millers Merry Manor, Walkerton. A lifelong Walkerton resident, Jessie was born on August 8, 1925 to Edward J. and Edith E.(Clark) Ullery. Growing up on her parent's farm, Jessie started school in the two room Jordon country school house and completed her education at Walkerton High School. On January 16, 1943, she married Robert Schaeffer and celebrated their 70th wedding anniversary in January 2013. During the Korean War, she worked at the Kingsbury Ordnance Plant as an inspector and in 1953 she spent many long hours helping build their home where they lived for more than 50 years. She worked at Harvey's Dime Store in Walkerton for many years and taught Sunday school at the Evangelical United Brethren Church in Walkerton and Calvary Baptist Church in LaPaz. She was a member of the Walkerton Historical Society and the First Baptist Church of North Liberty. Listening to first graders read at Walkerton Elementary School was one of her favorite pastimes. She enjoyed vacations with her husband, was a great cook, liked pie and ice cream and loved her family. She will be missed every day, but she will be in our hearts forever. Survivors include her husband, Bob; her daughter, Kay (Burt) Hall of South Bend, her son, Kurt Schaeffer of Bass Lake; six grandchildren, Brandon Reed, Nicole Barr, Eric Reed, Jennifer Spaid, Samantha Schaeffer and Seth Schaeffer; twelve great-grandchildren; two great-great grandchildren and her sister, Juanita (Joan) Minear. She was preceded in death by her daughter, Carol A. Schaeffer, her parents, her brother, Edwin A. Ullery and two sisters, Yvonne (Bonnie) Knowlton and Rosemary Ullery. Funeral services will be Thursday, June 20, 2013 at 11:00 a.m. (Eastern Time) in Rannells Funeral Home, Koontz Lake Chapel. Burial will follow at the Woodlawn Cemetery, Walkerton. Friends may call Wednesday from 4:00 p.m. to 8:00 p.m. and Thursday 10:00 a.m. until the time of services at the funeral home. Memorial contributions may be made to the First Baptist Church of North Liberty.

The family of Jessie Schaeffer created this Life Tributes page to make it easy to share your memories.

Send flowers to the Schaeffer family.