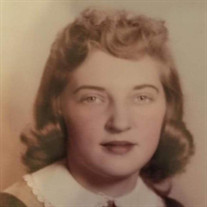 Jean Frances (Fath) Jesuit 80 of Knox, beloved wife, mother, sister, daughter, Aunt went to her heavenly home on August 11, 2021 after an illness. Jean was born to the late John and Sophie (Chavtik) Fath on July 18, 1941 in Chicago, IL. On July 18, 1959, she married the love of her life for 51 years, David F. Jesuit, Sr. who preceded her in death in 2011. She was the much-loved mother. Jean always wanted to be a schoolteacher, while she didn’t fulfill this dream formally, she did get the opportunity to teach her 11 children: Jane Fosler (Michael) of Arkansas; Elaine Howard (Chalmer) of Mississippi; Karen Mowbray of North Judson; David Jesuit (Brenda) of Grovertown; Steven Jesuit (Gayle) of Monterey; Joseph Jesuit who preceded her in death; Patrick Jesuit (Angela) of Knox; Jason Jesuit (Michelle) of Knox, Anthony Jesuit (Staci) of Warsaw; Justin Jesuit (Felicia) of Monterey and Holly Jesuit of LaPorte. She will also be missed by her 27 grandchildren and 28 great grandchildren, numerous nieces and nephews. She was the sister of Mary Lou Clemens, the late Patricia Brock, the late Charles Fath, the late Thomas Fath, Gerald Fath, Lorraine Ridgway and John Fath, Jr. Jean was a member at St. Matthew Lutheran Church, Hamlet. She will be greatly missed because she was greatly loved. Graveside service will be held at Eagle Creek Cemetery on August 18th, 2021 at 11:00 AM CST per her wishes. A Celebration of Life will be held immediately following the graveside service at the Knox Community Center. Donations can be made to St. Matthew Lutheran Church or St. Jude (her favorite charity).

The family of Jean Frances Jesuit created this Life Tributes page to make it easy to share your memories.

Send flowers to the Jesuit family.