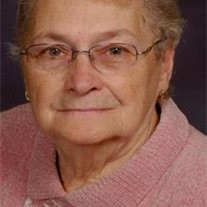 WALKERTON-Janice Aileen Bottorff, 81, passed away Tuesday, June 12, 2012 in St. Joseph Regional Medical Center, Plymouth, IN after a short illness. Mrs. Bottorff was born September 7, 1930 in Starke County, IN to Frank and Beatrice (Colwell) Burger and lived in the area all of her life. On September 18, 1948 in LaPorte, IN she was married to George "Mike" Bottorff, who preceded her in death in 1987. She was also preceded in death by her daughter, Peggy Meeker, two sisters, Imogene Magers and Alberta Cowen and two brothers, Harold and Roy Burger. Survivors include: one daughter, Linda (Mike) Sipes of Argos; two sons, Jerry Bottorff of South Bend and George Bottorff of Walkerton; seven grandchildren; seven great-grandchildren; brothers, Raymond Burger of Gulfport, MS, Duane (Pam) Burger of LaPorte and Gordon (Beverly) Burger of Knox and son-in-law, Charles (Butch) Meeker of Hamlet. Mrs. Bottorff was a former employee of Polygon in Walkerton, she attended the Koontz Lake Missionary Church and was a member of the Moose Lodge in Knox. Funeral services will be Saturday, June 16, 2012 at 11:00 A.M. (Eastern Time) in Rannells Funeral Home, Koontz Lake Chapel with Pastor Brian Baughman officiating. Burial will be at the Fletcher Cemetery, Hamlet. Friends may call Friday from 4:00 to 8:00 p.m. and Saturday after 10:00 a.m. ET at the funeral home. Memorial contributions may be given to the Koontz Lake Missionary Church.

The family of Janice A. Bottorff created this Life Tributes page to make it easy to share your memories.

Send flowers to the Bottorff family.