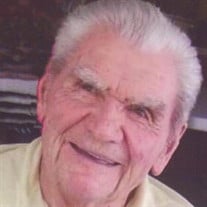 KNOX-James “Leonard” Messer, 89, passed away Monday, July 9, 2018 at Pilgrim Manor, Plymouth, IN. Mr. Messer was born July 1, 1929 in Morehead, KY to James C. and Lanna (May) Messer and lived in the area since 1962. On June 25, 1955 in Morehead, KY, he was married to Betty Hogge, who preceded him in death in 1989. On July 4, 1992 in Culver, IN, he was married to Anna Humes, who survives. Also surviving are one daughter, Sherry (Lloyd) Rosander of Grovertown; two sons, Keith (Evelyn) Messer of Plymouth and Jeff (Carolyn) Messer of Knox; one step-daughter, Lisa (Tommy) Scott of Plymouth; and many grandchildren and great-grandchildren. He was preceded in death by his parents; his first wife, Betty; one son, Randy Miller; one step-son, Ryan Romine; and 12 brothers and sisters. Mr. Messer was a U.S. Army veteran and served during the Korean Conflict. He was a member of the Hamlet American Legion Post #356 and the Gospel Lighthouse Church of Delong. Funeral services will be Thursday, July 12, 2018 at 1:00 p.m. CDT at Rannells Funeral Home, Hamlet Chapel. Burial will follow with military honors at Fletcher Cemetery, Hamlet. Visitation will be Thursday at the funeral home from 11:00 a.m. to 1:00 p.m. Memorial contributions may be given to the Gospel Lighthouse Church of Delong.

The family of James "Leonard" Messer created this Life Tributes page to make it easy to share your memories.

Send flowers to the Messer family.