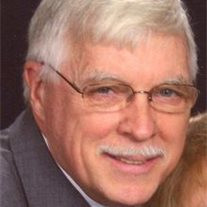 WALKERTON-James R. Menges, 69, passed away Saturday evening, June 23rd, 2012 in North Liberty from an automobile accident. Mr. Menges was born August 20, 1942 in Michigan City, IN to Edward and Mary Louise (Miller) Menges. On August 8, 1964, he was married to Rev. Terrie Lee Trobaugh Menges, who survives. Also surviving are: three children, Elizabeth E. Menges, married to Robin E. Kawecki of Hammond, Mark O. Menges, married to Sheila D. Menges of Columbus, OH and Connie L. Menges Lustofin, married to Keith J. Lustofin of New York, NY and two grandchildren, Oliver Kumar Menges and Aaron James Menges of Columbus, OH. Jim was a graduate of Elston High School in Michigan City. He graduated from Purdue University with a degree in English and Spanish and was active in the Purdue Exponent and Purdue radio. He earned his Master's Degree in Shakespeare from Ball State University and graduated from Railroad Conductor School, Calumet College. Jim was and is a man of God, loving his God, wife, family, friends and fellowmen. He was a true people person and a good neighbor. He was known for a quick sense of humor and a gentle disposition. He loved music and sang in a performance group. He was the perfect role model of a husband and father. He began his career at Marion High School, Marion, IN as head of the English department. Moving to Walkerton, he worked in the family business of Trobaugh Auto Parts Inc. for 27 years. Leaving the business, he worked for Indiana Harbor Belt Railroad, and was currently at Jos. A. Bank. He was active in the Walkerton Methodist Church for many years and has been a part of Liberty Bible Church for 14 years. Jim mentored at the South Bend Homeless Shelter, coached Little League and was an avid train enthusiast. Jim served as an EMT in Walkerton for five years. He enjoyed life to the fullest each day. His life ended here at the hands of an irresponsible driver, but his life continues in the hands of Jesus in his eternal home. No words can express how much he is missed. Funeral services will be Thursday at 10:00 a.m. (Eastern Time) at the Walkerton United Methodist Church with Rev. Michael A. Cramer officiating. Burial will follow at the Woodlawn Cemetery, Walkerton. Friends may call Wednesday from 3:00 to 8:00 p.m. ET at Rannells Funeral Home, Koontz Lake Chapel and Thursday at the church after 9:00 a.m. Memorial contributions may be given to the Walkerton United Methodist Church, 1000 Georgia St., Walkerton, IN 46574.

The family of James R. Menges created this Life Tributes page to make it easy to share your memories.

Send flowers to the Menges family.